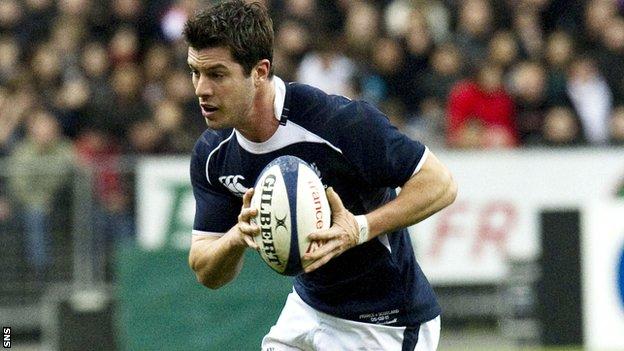 Wasps and Scotland full-back Hugo Southwell has been forced to retire due to injury.

The 33-year-old won the last of his 59 caps against Wales at Murrayfield in 2011, missing that year's World Cup with a knee problem.

He moved to Wasps from Stade Francais in the summer of 2011, having been at Bristol, Worcester and Edinburgh.

"This has been a very difficult time for me and I am absolutely gutted that I have been forced to retire," he said.

"I believed I had so much more to give, which is why Terry Evans, our physio, and I tried everything possible to get me fit after I sustained the injury in pre-season last year. I am extremely grateful for all his efforts along with the rest of the physio team."

Southwell made his Scotland debut as a replacement in 2004 against Samoa in New Zealand.

And he made a try-scoring debut at Murrayfield, touching down against Australia in the opening match of the 2004 autumn Tests. It was the first of his eight international tries.

An ever-present in his debut season for Wasps, Southwell was named club captain for the 2012/13 campaign.

"It has been an absolute honour to play at Wasps for the last three years and to be named captain last year was certainly one of the highlights of my career," he added.

"I have met and made friends with a lot of great people and have played under some top coaches, most notably Dai Young, who I have great respect for.

"He is building something special here and there are exciting times ahead I am sure. I look forward to following the progress of the team and being a regular visitor to Adams Park in the coming years."