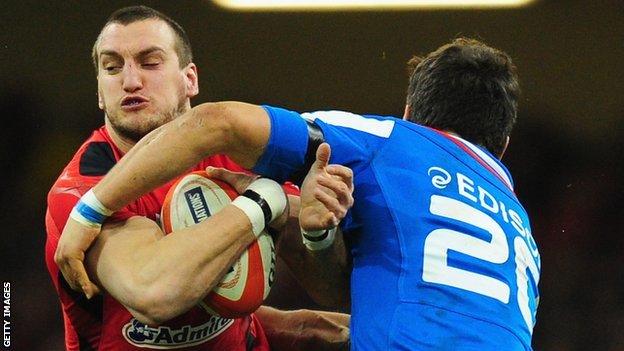 Warburton led a Welsh-dominated Lions party to Australia in 2013.

But he says those players have been "well looked after", adding: "I don't think it's going to have an impact this time around."

Wales face France at Millennium Stadium on Friday, 21 February, hoping to bounce back from 26-3 defeat by Ireland in Dublin that followed a 23-15 win over Italy in Cardiff.

That loss in Dublin was a blow to Welsh hopes of winning a record third successive title.

It's not like we have finished the campaign, we have a chance to put it right. We have won 10 out of our last 12 Six Nations games and we need to remember that

And Warburton, who plays for Cardiff Blues in the Pro12 against Glasgow on Saturday, says current players are better managed in terms of post-tour rest than their predecessors.

"Looking back, eight, 12, 16 years ago the off-season for players was very short," he explained.

"Now it is so well managed I don't think it will be an excuse."

Wales were the last team other than France to win what was then a Five Nations title in the wake of a Lions tour.

That was in 1994 when current Wales forwards coach Robin McBryde was Wales' unused replacement hooker.

Having won titles in 2012 and 2013, Warburton believes his side has what it takes to recover from defeat by Ireland to challenge for honours once more.

"The players are desperate to show everyone the Wales they know," said Warburton.

"The result [against Ireland] was a massive disappointment with a lot of uncharacteristic errors.

"From a structural point of view as forwards we have to take responsibility.

"We simply didn't replicate what we had done in training during the game and that is disappointing. It was frustrating.

"We weren't urgent enough and our ball retention wasn't good enough, but the things that went wrong can all be put right and we are working hard to do so in the build up to France."

The captain said Wales were delighted they have "a chance to put it right".

"We have won 10 out of our last 12 Six Nations games and we need to remember that," he added.

"We are used to meeting up at the start of the week in a positive mood so this week has been a little different - we took a day to look back and reflect.

"Now the focus is on putting it right and we have got that opportunity in front of our home crowd to put in a performance and get the result against France."