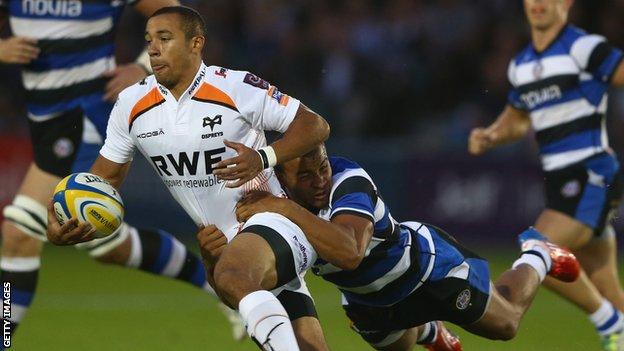 Ospreys wing Eli Walker has signed a new two-year deal with the region.

The 21-year-old, who broke into the side in 2010 and has since been called into Warren Gatland's Wales squad, will remain with the region until 2016.

"I wouldn't have liked to have had to go anywhere else so it's great that the coaches want me here," said Walker.

Walker has made 37 regional appearances and scored 10 tries, but came off with a hamstring problem on his return from injury against Ulster last week.

"The main aim for the next couple of years has to be to stay fit," added Walker, who was first called into the Wales squad for last year's Six Nations.

"I've had some bad luck this season and not managed as much game-time as anyone would have hoped for, but experiences like this can help to make me stronger.

"I want to keep playing for the Ospreys week-in, week-out and get consistent performances under my belt."

Walker has yet to be capped by Wales as injuries have ruled him out of making his senior international debut.

His new deal comes two days after Wales centre Ashley Beck committed his future to the region and less than a month since captain Alun Wyn Jones extended his deal at the Liberty Stadium.

Their signatures come at a time of dispute in Welsh rugby, as the regions continue to engage in debate over the Welsh Rugby Union's participation agreement, and Walker welcomed the "security" his new deal offered.

Ospreys rugby operations manager Andy Lloyd said: "We are hopeful that once we get him through his current frustrations we'll see his physical attributes come to the fore, while pushing his rugby onwards and upwards, enabling him to reach his undoubted potential.

"Supporters have seen what he can do with ball in hand and have really warmed to him as as a player and an individual, so they will share our excitement that we have been able to keep such another local talent at the region."

Ospreys, who face Treviso in the Pro12 on Sunday, have also recruited Newport Gwent Dragons hooker Sam Parry and full-back Dan Evans, as well as versatile Fiji back Josh Matavesi from Worcester Warriors.