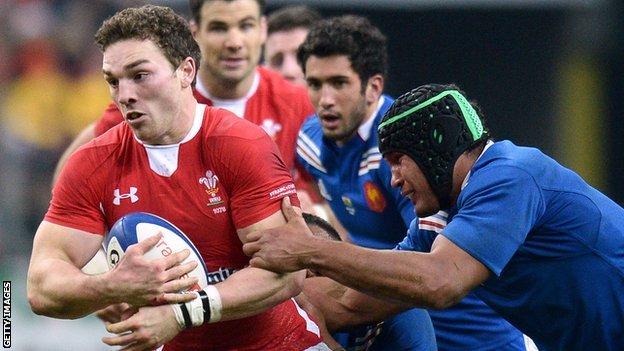 Wing George North says Wales will be judged on how they react to their 26-3 defeat by Ireland when they host France in the Six Nations on Friday.

Last year North scored a try as Wales recovered from an opening loss by Ireland to beat France 16-6 on the way to retaining their title.

"I am a big believer in sides being judged on how they react to a setback," said Northampton's North.

"And the game against France is a chance to show how we can bounce back."

We were outplayed by Ireland, but we know how to come back and know what needs to be done

The 6ft 4in winger added: "It's a sign of a good side to turn things around and bounce back, and that is what we need to do.

"We need to react next week - the defeat was a massive disappointment."

North could switch to centre as Scarlets' Scott Williams (shoulder) is ruled out and Jonathan Davies (pectoral injury) has yet to fully recover.

Ospreys centre Ashley Beck is training with Wales as cover, but coach Warren Gatland could opt to pair North with Jamie Roberts against the "on-form" French duo of Mathieu Bastareaud and Wesley Fofana.

"We met back up at the start of this week and the defeat was still ripe in the boys' memory, but we reflected and had a few meetings to review the performance [against Ireland]," said North.

"We have put things in place and begun our preparation for France.

"It is important to remember that we proved last year that defeat doesn't mean it's all lost.

"We have lost just two of our last 12 games in the competition, so our form has been good overall.

"They [France] have started really well with two wins from two and are looking good.

"They have got a big pack and a big scrum which showed up well against Italy last week, and their back-line is firing as well.

"Mathieu Bastareaud and Wesley Fofana are both on form at the moment and the back-three are looking sharp and running in tries as well."