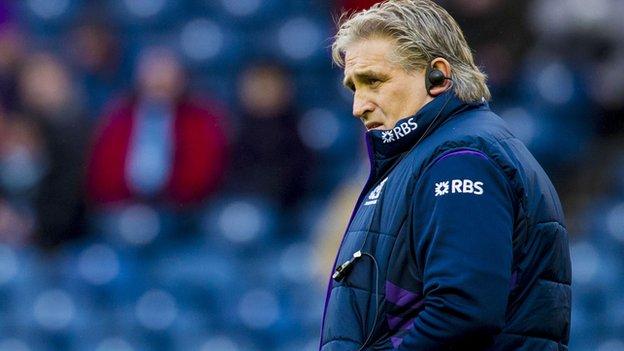 Former Scotland captain Andy Nicol insists Scott Johnson should not have an influence on the national team when he moves to his director of rugby role.

Johnson is currently the interim head coach of Scotland, who have lost their opening two 2014 Six Nations matches.

The Australian will move upstairs when Vern Cotter becomes head coach in June.

"I don't think the director of rugby should have a hands on role in the coaching of the national team," Nicol told BBC Radio Scotland's Sport Nation.

Scott Johnson as director of rugby in the next year should not be influencing the national team, that has to be Vern Cotter's sole responsibility

Scotland lost 28-6 to Ireland in Dublin before a sore 20-0 Calcutta Cup defeat to England at Murrayfield.

New Zealander Cotter will take the reins once his contract expires with French Top 14 side Clermont Auvergne.

Nicol added: "The director of rugby role is overseeing the whole development of the game in Scotland from grass roots right up to international level.

"The international game drives it and that's where all the revenue comes from.

"He'll be a good sounding board and obviously Vern Cotter will be reporting to the director of rugby, I imagine, unless he's got a direct line to Mark Dodson [SRU chief executive].

"So there's got to be open lines of communication. But Scott Johnson as director of rugby in the next year should not be influencing the national team, that has to be Vern Cotter's sole responsibility."

Nicol, who captained Scotland to a famous Calcutta Cup win over England in 2000, says Cotter should be free to choose his own backroom staff, rather than inheriting coaches already involved in the national team set-up.

"I think where we've flawed in Scottish rugby is for the last three coaching teams, we never let the head coach pick his backroom team," he said.

"If you are going to bring in somebody like Vern Cotter, which I am really excited about, he must be given free rein to bring in who he wants."