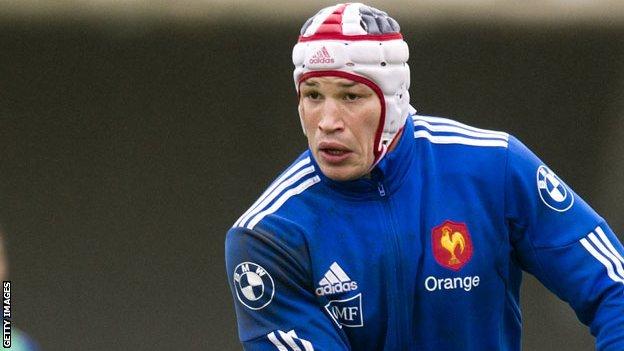 Unbeaten France have made two changes to their squad for Friday's game against Wales in Cardiff.

Mach takes over from Clermont Auvergne's Benjamin Kayser (knee) while coach Philippe Saint-Andre has opted for Lauret instead of a prop.

France beat England 26-24 in their Six Nations opener and a week later saw off Italy 30-10, with both wins coming at Stade de France.

Wales suffered a 26-3 defeat by Ireland after starting their bid for a record third successive title with a 23-15 win over Italy.

Skipper Sam Warburton has said France cannot rely on the Six Nations history that has seen them win the title in the seasons following the last four British and Irish Lions tours.

Injury prevented Lauret taking part in France's two opening wins, but the 24-year-old was back for Racing-Metro's 18-8 Top 14 win over Bayonne, in which Phillips went on as a last-quarter replacement.

Ducalcon, capped 17 times, initially took over from banned prop Rabah Slimani, who is out for two weeks after being sent off for a headbutting incident in their win over Italy.

However, Saint-Andre brought in Lauret instead of a prop in the wake of Bernard Le Roux being diagnosed with concussion suffered at the end of the Italy game.