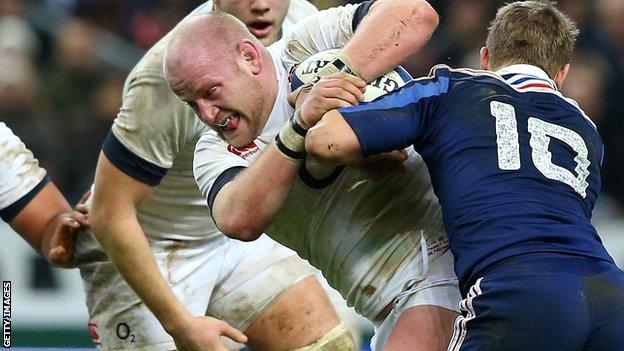 England have been dealt a major blow after tight-head Dan Cole was ruled out of the rest of the Six Nations Championship through injury.

The 26-year-old Leicester prop has a bulging disc in his neck.

England play Ireland on Saturday and head coach Stuart Lancaster is left with David Wilson, just back from a calf injury, or the inexperienced Henry Thomas as tight-head options.

"It's massively disappointing for Dan, Leicester and England," said Lancaster.

"But the important thing is that this has been diagnosed and that Dan gets the appropriate rest and treatment."

The blow has left Lancaster short of options ahead of Saturday's Six Nations match against Ireland at Twickenham.

Bath prop Wilson, 28, looked short of match fitness in Bath's 27-23 win against Exeter while 22-year-old Sale prop Thomas has only won three caps for England, all of which have come from the bench.

"This will be an opportunity to develop experience in this area," Lancaster insisted.

"It's great to have David Wilson back, as well as Henry Thomas, who has trained well and came off the bench against Scotland."

Cole's injury was diagnosed when he experienced weakness during a gym session at St George's Park last week during an England training camp.

He has been told to rest the problem and will now undergo further assessment, although no date has yet been given on when he will resume playing.

Lancaster said: "Our medics are working closely with Leicester's to come up with a programme that will ensure Dan returns in the best possible shape."

Cole made his debut as a replacement for Wilson in the 30-17 win over Wales during the 2010 Six Nations campaign.

He has won 45 caps and started both of England's previous Six Nations matches this year - the 20-0 win over Scotland at Twickenham and the 26-24 defeat by France at the Stade de France.

The injury could also rule Cole out of Leicester's Heineken Cup quarter-final against Clermont Auvergne on 5 April although Tigers director of rugby Richard Cockerill has not put a timescale on his return.

"It's very disappointing for us and for England - and obviously for Dan - but his long-term fitness is more important," Cockerill said.

"He'll have time to get over this issue and come back when the medical teams are satisfied with his progress."