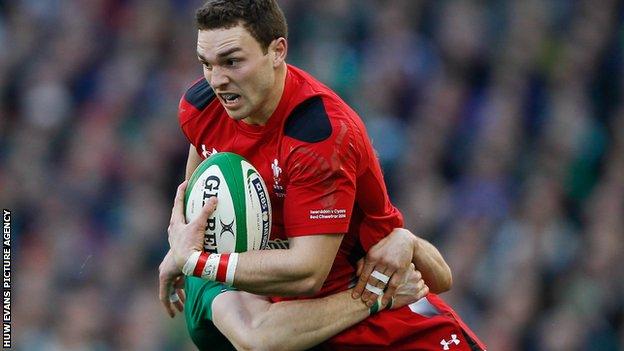 Scott Williams is ruled out of the Championship while Davies has yet to feature this campaign.

Wing North was switched to centre after Williams suffered a shoulder injury during Wales' defeat in Ireland.

"I think Davies will come straight in if he's fit," said Jones. "If he's not, I think he'll go for George North."

There is a doubt over powerful France centre Mathieu Bastareaud for Friday's clash in Cardiff following reports that he damaged a shoulder playing for Toulon against Castres at the weekend.

That threatens to remove some power from the visitors' midfield while Gatland has the option of increasing his if Davies or North partner Jamie Roberts in midfield.

"I don't think Bastareaud is going to be available, I think he's injured.

"They'll [France] probably be a little more fragile and not as powerful in midfield.

"I think he'll [Gatland] stick to his game plan, he'll use power up the middle and bring in Liam Williams on the wing."

Davies, who will join Clermont Auvergne on a two-year contract next summer, made his comeback for the Scarlets against London Irish in the LV= Cup on 1 February.

The 25-year-old returned to the Wales squad but was not among the players released back to the regions for the weekend's Pro12 matches.

"He's [Davies] been left in camp purely to get right. If he's fit I think Warren Gatland will pick him," said former Swansea, Bristol and Cardiff scrum-half Jones.

However, Jones does not believe Gatland will make many unenforced changes, including scrum-half.

"I think he'll stick with Mike Phillips, who is a big game player," Jones said.

"I just don't think Rhys Webb, in terms of his management of games, is quite ready for it just yet."

France have lost two front rowers from their squad for Friday's clash against Wales with Clermont hooker Benjamin Kayser out of the tournament with a knee injury.

Kayser has been replaced by the uncapped Brice Mach from Castres while Racing Metro prop Luc Ducalcon is replaced by club-mate and flanker Wenceslas Lauret.