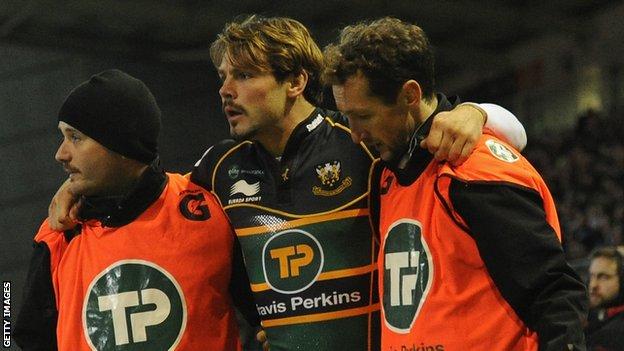 England full-back Ben Foden could return from injury for Northampton Saints' trip to Newcastle this weekend.

The 28-year-old has not played since damaging his knee in an 18-0 win against the Falcons in November.

"He's running very well now and trained last week on his own, but [doing] full training. He'll be in full training this week with the lads."

Foden had hoped to be back in time to face Worcester on Saturday, but Mallinder opted to give the former Sale back an extra week on the sidelines as Saints ran out 30-14 winners.

The injury ruled Foden out of Stuart Lancaster's England squad for the Six Nations, having played on the wing in the last two autumn internationals for his country.

However, he could travel with the Saints squad to Kingston Park on Sunday.

"Whether we put him in or not - we'll see how he reacts on Monday and Tuesday. But he's very close to returning," said Mallinder.