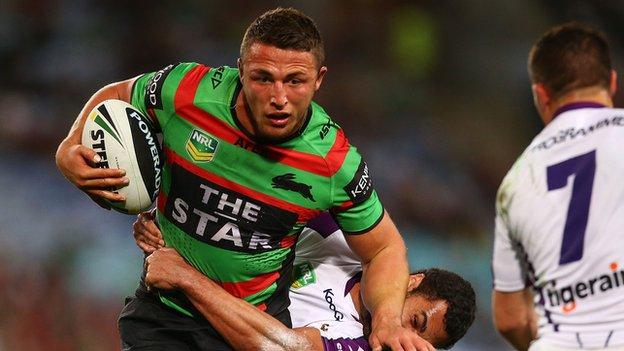 Sam Burgess is a rugby freak. A 6ft 5in, 18st beast of a man with quick hands and a charming character.

Brave and strong on and off the field, he is a 25-year-old who has always been bold enough to carve out his own career path.

A sporting superstar with three giant brothers playing in the same team at South Sydney, all matured beyond their years by family heartache.

It is already a pretty decent movie script even before Burgess picks up a union ball and attempts to reach the World Cup in both codes.

In Australia, he is a big celebrity, seduced by Sydney in 2009 thanks to the efforts of Crowe, the Rabbitohs' co-owner. A regular in newspapers and gossip mags, he has been as much in the spotlight off the pitch as he has on it.

It is a completely different world to the one in which he first forged a career in the sport.

Burgess made his Super League debut at 17 with Bradford Bulls, then coached by Steve McNamara, the current England boss.

At the same time as attempting to make the big step-up from academy rugby, the teenager was caring for his terminally ill father Mark.

"His dad's death made him a man," McNamara recalls. "His maturity was beyond his years.

"He was going through a really tough period of his life, which tells you a bit about his tremendous character, to come through this adversity and be both a great player and a great person. He came through it with a tremendous amount of credit. It was beyond belief what he did."

Mark, himself a former rugby league player and coach, deteriorated in health rapidly and passed away aged 45.

Sam has spoken of how this tragedy toughened him up, and gave him the strength to make bold decisions for himself. It is no surprise, therefore, that after leaving for Australia on his own, he is now willing to leave his three brothers and mum Julie in Sydney to return to the UK for a new challenge.

Yet under that tough exterior is a pretty sensitive bloke. Burgess broke down in tears before his Rabbitohs debut when Crowe gave him a club membership card bearing his father Mark's name.

"He is a tremendous person," says McNamara, with whom Burgess spoke last week to explain his reasons for quitting league. "He's an energiser - he brings energy to any group. He has a great personality, a strong personality, is very strong minded and strong willed.

"He is a great carer of other people. He will be a big asset to Bath Rugby and, hopefully, England if he makes it."

Having spoken to McNamara, and former team-mates at England and Bradford, few have a bad word to say against the player or the man.

Tall, heavy, lean, quick. Very powerful and skilful. He will break the line a lot in union, bend the line and poke his nose through the other side

"Clearly he is a world-class player, but what impressed me more was his maturity, his leadership, his mental toughness, his ability to inspire his team-mates," Lancaster says.

"Anyone who goes to Australia when they are 18 years old to try to find a tough level of competition because he wants to challenge himself, says something about the individual."

Some league fans may feel betrayed that a player developed within the sport now takes those skills away to benefit another game.

But Burgess knows how short life is, and how a career is even shorter. He has challenges and goals to achieve and has no problem in thinking for himself. As a player, he is a born leader.

Always the most highly rated of the four brothers, Sam took no time in making his impact at Bradford. His Super League debut came in 2006, a year that also saw him named senior academy player of the year.

Kevin Sinfield, England captain: "Absolutely without doubt one of the best players I've ever worked with. Top player, top bloke."

Eorl Crabtree, England teammate: "I personally think he should do what the hell he wants. One life, one crack at it."

Keith Senior, former GB and Leeds centre: "I'd do the same and don't fault him. A massive opportunity and he's still young enough to do more in both codes."

The 2009 move to Sydney marked a transformation from hard-running Super League forward to hard-hitting NRL machine. England's man of the tournament by an absolute mile in last autumn's league World Cup, he was the team's on-field heartbeat.

His playing style should excite union fans. He has a ridiculous combination of bulk and athleticism.

Fast forward to February 2014, from the Yorkshire village of Odsal to Twickenham, and the England rugby union head coach. "Sonny Bill Williams is a rugby league forward playing as a union back," says Lancaster. "That's a much easier transition and is probably the closest comparison."

McNamara, who has coached Burgess as both man and boy and seen the transformation from raw Bradford Bull to commanding international enforcer, calls him the ultimate physical specimen.

"Tall, heavy, lean, quick. Very powerful and skilful," he says. "He will break the line a lot in union, bend the line and poke his nose through the other side.

For a man who thrives on the big occasion and under the media spotlight, Burgess is desperate for his World Cup gamble to pay off.

If he misses it, then swapping Sydney's bright lights and a shot at NRL Grand Final glory for three years of club union in Bath may prove a tough adjustment.

Yet anyone who has seen him play league would back him to crack union, too - whatever the odds.