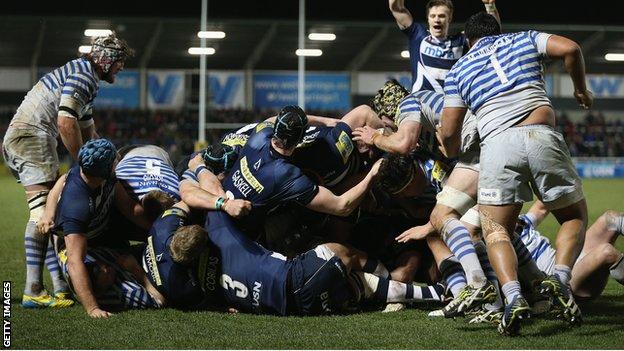 Sale's Marc Jones believes a top-four place in the Premiership is achievable despite the loss to Saracens.

The 26-year-old hooker, making his first league start since December, scored the game's only try in Friday's 15-10 defeat at the AJ Bell Stadium.

A win for the Sharks would have moved them up to fourth ahead of the other weekend games, but they now lie sixth.

There's confidence in our driving maul and we spend enough time on it in training. It's something that we base our game around

"It would have been nice to have a win and push the top four, as that's our aim," Jones told BBC Radio Manchester.

"The teams above us do need to keep a close eye on us lot behind."

Jones agreed a new contract at the back end of last season and has shared the time at hooker with academy product Tommy Taylor this season.

The Welshman's try came following a driving maul line-out, something Sale scored from twice in the win over Gloucester, and Jones says it is a weapon they look to use.

"It's eight lads working hard - well, nine really as Sam Tuitupou comes in at the end and tries to rip the ball off me," Jones added.

"It just pays dividends to the forward pack no individuals.

"There's confidence in our driving maul and we spend enough time on it in training. It's hard, physical and it pays off on a Friday night and something that we base our game around.

"Saracens are a good team and you've got to take your hat off at the second-half but we felt we deserved to win.

"If you look back at this season's games there are not many teams who have run over us and it's something we pride ourselves on - big defence and being a physical, confrontational team."