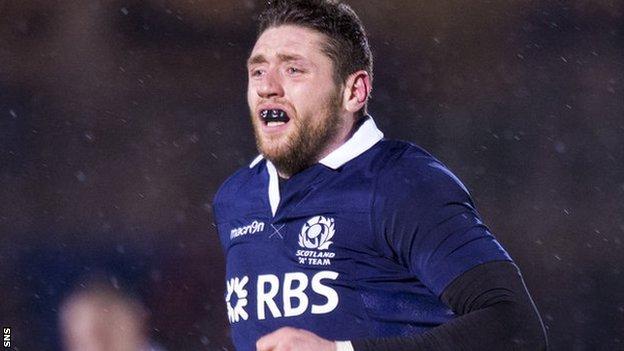 Versatile Edinburgh back Jack Cuthbert has been called up to the Scotland squad for Saturday's Six Nations trip to face Italy in Rome.

The 26-year-old, who can operate either at full-back or on the wing, comes in after Sean Maitland was ruled out of the championship through injury.

Cusiter was injured as Warriors beat Cardiff Blues 27-20 on Saturday.

Scotland team doctor James Robson said: "Having completed the game for Glasgow Warriors at Cardiff at the weekend, Chris Cusiter subsequently reported to national camp today with a tight calf.

"Given the proximity of Saturday's international in Rome, Chris will undergo a precautionary scan at the SPIRE Murrayfield Hospital this afternoon in order that we can have a more definitive assessment."

It meant that Edinburgh's Grayson Hart, who made his Scotland A debut in last month's draw with England Saxons, trained with the national squad on Monday while Cusiter sat out the session.

New Zealand-born scrum-half Hart could win his first full cap from the replacement's bench against the Azzurri if Cusiter's problem rules him out of the match at Stadio Olimpico.

Cuthbert, who was an unused replacement in the corresponding match in Rome two years ago, is promoted from the Scotland A squad.

The England-born back, who has made 14 starts for Edinburgh since joining from Bath in June last year, has one full Scotland appearance to his name, having made his debut against Ireland in the World Cup warm-up Test in 2011.

Cuthbert will add competition for places with Maitland having been ruled out for the rest of the championship after suffering knee and ankle injuries in the defeat by Ireland a fortnight ago.