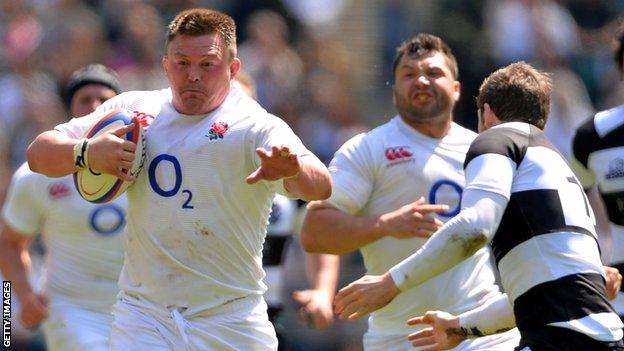 Head coach Stuart Lancaster has chosen the 28-year-old Bath tight-head over Sale's Henry Thomas, who is 22.

Wilson, capped 31 times, has played only 47 minutes since recovering from a calf problem picked up two months ago.

But Lancaster said: "He hasn't played so much this season, but we're 100 per cent confident about bringing him back into the team."

Wilson's cameo came in Saturday's Aviva Premiership victory over Exeter and, despite his lack of match fitness, he will be promoted straight into the starting XV against unbeaten Ireland because of Cole's absence with a bulging disc in his neck.

England will host Ireland at Twickenham looking to build on their 20-0 victory over Scotland, having been beaten by France on the opening weekend.

"Clearly it's not ideal having had such limited game time but there are certainly positives from my point of view," Lancaster said.

"He was outstanding for us on the summer tour to Argentina and, for me, he's played his best rugby this season.

"His calf has healed pretty well, but it's a tight back that's kept him out for the last couple of weeks.

"We're bringing in an experienced tight-head who has a lot of runs on the board in terms of international experience and game time."

Leicester prop Cole, 28, needs to rest the bulging disc, which is trapping a nerve.

He was diagnosed when he experienced weakness during a gym session at St George's Park last week.

The British and Irish Lions front row is due to see a specialist for a second opinion on Tuesday.

"It only happened during one specific movement," Lancaster said.

"He was doing a bench press and he was down in strength in one arm, which then alerted everyone to the need for further investigation.

"It was then on the resulting scans that we saw the bulging disc.

"My understanding from the medics was that it happened over a period of time and was not a one-off incident that caused it.

"Obviously now that it has been diagnosed, it's not worth to taking the risk over, we need to allow to heal properly."