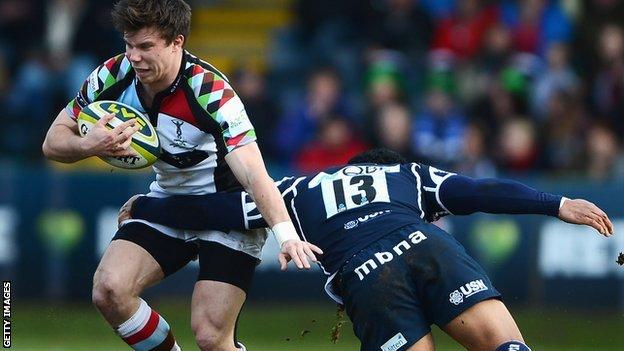 Worcester Warriors have agreed a deal to sign winger Sam Smith when his contract at Harlequins runs out at the end of the season.

"I've enjoyed my time at Harlequins, making this a tough decision," he said.

"But when I spoke to Worcester's director of rugby Dean Ryan, it was clear to me that I wanted to be a part of his vision at Worcester."

Smith, who spent five years at The Stoop, has been a regular feature in the Heineken Cup over the last three years and is already casting an eye towards next season at Sixways.

"The opportunity to develop as a rugby player and take on this exciting challenge is one I am looking forward to getting stuck into."

Smith's capture comes just over a week after Ryan Lamb arrived at the club from Leicester, bringing the number of new players signed by Ryan since the season began to nine.

Warriors are still stranded at the bottom of the Premiership table, without a league win all season.

But their encouraging performances over their last two matches has prop Rob O'Donnell believing a first Premiership win is imminent.

After being pipped by reigning champions Leicester Tigers by a single point on 7 February, Warriors slipped to a 30-14 defeat by Northampton on Saturday.

"You put those two performances together and compare them to earlier in the season, they're worlds apart."

Saturday's game at Saints - runners up to Leicester in the Premiership final in 2013 - turned on the sending off of Warriors captain Jonathan Thomas for aiming a punch at Northampton forward Sam Dickenson, who was himself sin-binned after the incident.

Thomas will now appear at a Rugby Football Union disciplinary panel on Wednesday.

O'Donnell, who was an unused replacement against Saints, said the the team are not focusing on the incident.

"Not much has been said about that [in the dressing room], we're just taking the positives out of the game," he said.

"The game last week [against Leicester] gave us a massive confidence boost and we've come to another top-of-the-table team and tried to do the same.

"Obviously the turning point was the sending off and it got away from us a little bit."

Despite the odds, former Sale forward O'Donnell says they are not viewing survival as a lost cause.

"We all want to stay up and we all care deeply."