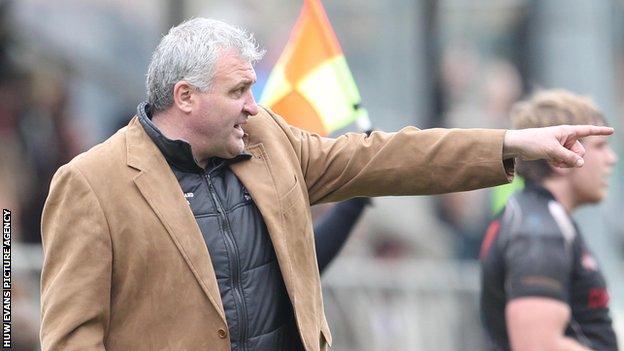 Cardiff rugby club has confirmed that former Wales centre and fly-half Mark Ring has left his role as backs coach.

Ring took up the position in November 2012 having worked at Cross Keys in a similar position.

A Cardiff RFC statement said: "Cardiff RFC can confirm reports that Mark Ring has left his coaching position at the club with immediate effect."

Cardiff, who are seventh in the Welsh Premiership, beat Newbridge 30-3 in the Swalec Cup on Saturday.

It is a trophy Ring has previously won as a coach in 2012 with Cross Keys.

He helped guide the Gwent part-timers to the final of the British & Irish Cup final, where they lost 31-12 to Munster A, in the same season.

Cardiff RFC director of rugby, Martyn Fowler has also left the club. He has resigned to take up a new post at Cardiff and Vale College.

A Cardiff RFC statement said: "Cardiff RFC would like to wish Martyn the very best of luck in his new role and thank him for all his efforts both on and off the field during the last 18 months."