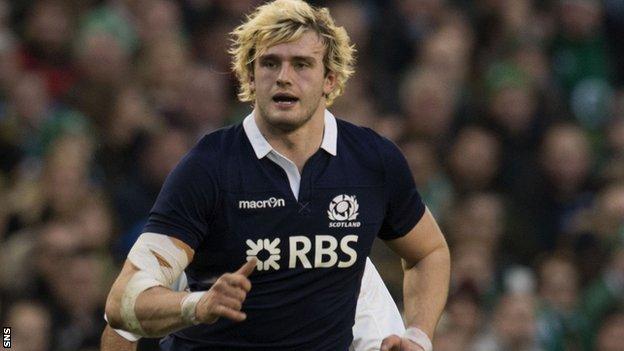 Scott Lawson replaces Ross Ford at hooker, while Richie Gray comes in for Tim Swinson in the second row for the match in Rome.

The only other change sees Johnnie Beattie taking over from David Denton at number eight.

Scotland have lost their two opening matches against Ireland and England.

Gray, who toured with the British and Irish Lions, featured as a replacement in the 28-6 opening weekend defeat in Dublin but was not selected for the 20-0 loss against England at Murrayfield.

At the end of the day, we've got to do better and that's what we're going to do. The best way to close a critic's mouth, is to perform

Johnson said Gray's return was down to the 24-year-old returning to his club Castres and ironing out some issues with his performance.

"We've been talking to Richie since the autumn to work on certain areas of his game," explained Johnson.

"He went back to his club and worked on a couple of aspects.

"Coinciding with some issues we're having with our set-piece, the timing was right. He's showed some improvement in his game and hopefully we derive the benefit in other areas as well.

"I want people to play for Scotland on achievement and form. It shouldn't be who you are - the same rules should apply. Richie has acknowledged it. He's a great lad and a great human being. It's nice to have him back.

Gray admitted that his exclusion had been upsetting and said he was looking to put in a "big performance" in Rome.

The poor start to this year's Championship has prompted strong criticism of Johnson from fans and media commentators, something that was dismissed by scrum coach Massimo Cuttitta, who believes the Australian is doing a "great job" in his temporary role.

Defeat in Saturday's encounter with Italy would almost certainly ensure Scotland receive the Wooden Spoon, but Johnson said criticism of recent results had no effect on him.

"Everyone is entitled to their opinion. I'm not going to argue against it - the people I care about are the people close to us.

"Is the mood down? Yes. Should it be down? Yes, it should be.

"At the end of the day, we've got to do better and that's what we're going to do. The best way to close a critic's mouth is to perform.

"We're out there to compete. A great performance determines our win.

"Everyone is a bit edgy. They're coming at us - but walk towards the pressure. That's the way to go. Take it from them. We'll be alright."