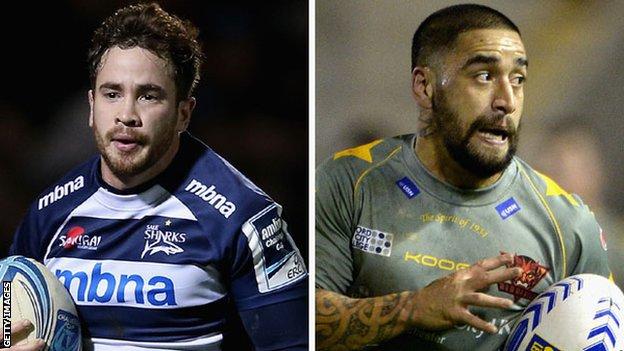 Rugby union side Sale Sharks and Super League outfit Salford Red Devils are to meet in a cross-code fixture.

The match will take place at the AJ Bell Stadium - the home ground of both clubs - on Tuesday, 26 August.

One half of the game - the first of its kind in England for more than a decade - will be played with union rules and the other half under league rules.

Wigan overcame Bath in a double-header in 1996, while the Sharks beat St Helens at Knowsley Road in 2003.

The proceeds from the match will go to two charities - the Prince's Trust and the cancer charity Maggie's.

"Everyone at Sale Sharks is very excited about taking on our friends and rivals in rugby league," said Sale's director of rugby Steve Diamond.

"Our players will definitely be up for the challenge and I'm sure our fans will be there making plenty of noise."

Red Devils head coach Brian Noble added: "This is a great opportunity for our guys to pit their skills against different athletes. It will be a big challenge but I think they'll relish it.

"The fact that this is for two such fantastic causes is going to be a big motivator for both teams."

Salford moved from The Willows to their new 12,000-capacity home at the start of the 2012 Super League season and Sale played their first competitive fixture there in September of that year.

However, the Sharks have recently revealed that they are considering a return to Stockport County's Edgeley Park because of concerns about the financial viability of playing their home games at the stadium in Barton.

Sale are currently sixth in the Premiership, while the Red Devils - who finished bottom of the table last term - won their opening league fixture of 2014 against Wakefield on Sunday.

In the first "Clash of the Codes", Wigan defeated Bath 82-6 in a rugby league game at Maine Road and lost 44-19 in the return rugby union match at Twickenham.

Eleven years ago, Sale took a 41-0 lead against Saints in a first half played under union rules and held on to win 41-39.