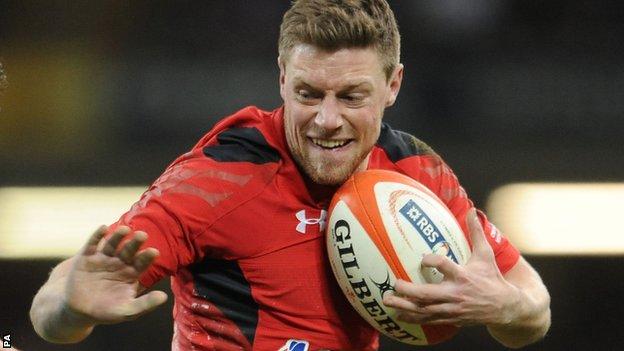 Wales fly-half Rhys Priestland has ended speculation over his future by signing a contract extension with the Scarlets.

The 27-year-old's previous deal was set to expire at the end of this season.

Priestland had been linked with a move to several English clubs, including Gloucester, London Wasps and Leicester.

"I'm really pleased to secure my contract with the Scarlets going forward and continue my commitment to rugby in Wales," Priestland said.

"The Scarlets is where I've developed as a rugby player and have been supported since I first started playing - with some good coaches and experienced senior players helping me in my career."

Priestland, who has won 27 Wales caps, joins fellow international Scott Williams in committing their futures to their region.

Both players are understood to have been offered central contracts by the Welsh Rugby Union, but so far only Wales captain Sam Warburton has taken up that option.

Priestland, who won the Grand Slam with Wales in 2012, has started both of Wales' opening Six Nations matches so far this campaign and is expected to keep the 10 shirt on Friday night against France in Cardiff.

"I'm pleased to have this all decided now, so I can focus on our Six Nations rugby campaign before returning back to the Scarlets for what should be an exciting finish to the league season," Priestland added.

The WRU released a statement welcoming the news that Priestland had committed his immediate future to remain in Wales, while also affirming the governing body was prepared to offer contracts to players unable to agree new deals with their region.

"The decision of Rhys and other key players to commit to Welsh regions is being seen as a positive signal for the game in Wales at a time when lucrative offers are being made for players to move abroad," read the statement.

"The WRU remains cautiously optimistic that discussions related to the agreement of a European cup competition format for next season are nearing resolution.

"The WRU and the regions are currently negotiating a new Rugby Services Agreement which will include terms for player welfare and release for international duty.