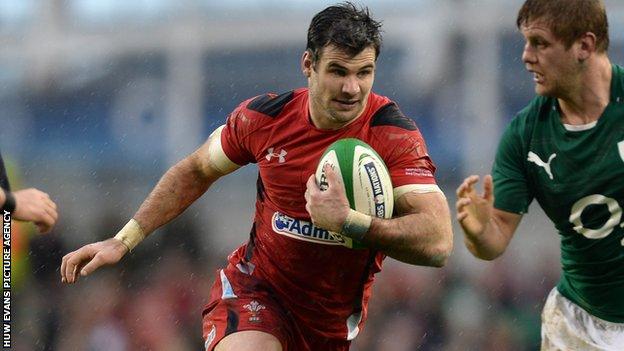 Scrum-half Mike Phillips has been dropped to the bench for Wales' match against France in Cardiff on Friday.

The Lions half-back is replaced by Osprey Rhys Webb, while George North moves to outside centre, Liam Williams replaces him on the wing and lock Luke Charteris returns from injury.

"He probably got a bit confrontational last week, got yellow-carded as well."

Phillips, 31, capped 82 times by Wales and a double Grand Slam winner, has been a mainstay of Gatland's side for several seasons.

But Gatland said that the form shown recently by Webb persuaded the New Zealander to make the change at half-back for the crucial Six Nations game at the Millennium Stadium.

"It's an opportunity for Rhys Webb," said Gatland. "We released him back at the weekend to give him some game time with the Ospreys, [and we] felt he needed some game time, [and] felt he played well.

"It's probably an opportunity [for Phillips] to reflect on his performance against Ireland and that's why we've put him on the bench and given Rhys a chance.

"The fact that Mike has been a first choice for a long time, it's important that we give someone else an opportunity in that position to stake a claim and also give us some depth in that role as well."

As had been widely expected, British and Irish Lions wing North moves to outside centre, taking the 13 shirt after injuries to Scarlets pair Scott Williams and Jonathan Davies.

Scarlets full-back Williams starts on the wing, while Charteris returns from a hamstring injury in place of lock Andrew Coombs after missing the 26-3 loss in Ireland.

Ospreys fly-half Dan Biggar has been named on the bench.

Wales are looking to rekindle their hopes of a third successive Six Nations Championship with victory against France, who have Mathieu Bastareaud fit after a shoulder injury.

"Friday is a massive game for us," said Gatland.

"As a squad we have a huge amount of experience in this tournament and we will be calling on that this weekend.

"We see the game as a huge opportunity for us to put things right."

Regarding the changes Gatland said: "Luke Charteris has been working really hard over the past couple of weeks and it's a big boost for us that he is back.

"George North moves into the midfield and he brings great footwork to the role and we were impressed when he went there against Australia in the autumn.

"His partnership with Jamie [Roberts] will be important as we look to stop the directness of France and Mathieu Bastareaud."

Scarlets duo Samson Lee and Emyr Phillips and James King of the Ospreys have been released back to their regions for this weekend.