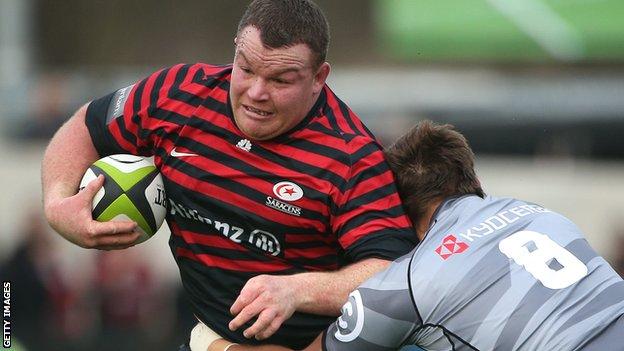 Saracens prop Matt Stevens has agreed to join South African side Sharks on a two-year deal this summer.

The 31-year-old former England international has been with Sarries since January 2011.

The Durban-born forward won 44 caps for his country and has been on two tours with the British & Irish Lions.

"Matt's versatility on both sides of the scrum and his experience makes him a great acquisition to our squad," Sharks chief executive John Smit said.

After representing South Africa at Under-18 and Under-19 level, Stevens joined Bath in 2002 but his spell with the club was ended when he was handed a two-year drugs ban in February 2009.

He agreed to join Saracens when his ban had been served and he has gone on to make 58 Premiership appearances for the north London club.

Stevens appeared for England Under-21s in the 2003 Junior World Cup and made his senior debut for the national side against New Zealand in 2004. He retired from international rugby in autumn 2012.

He went on tour with the Lions to New Zealand in 2005 and Australia in 2013 and made a total of 12 appearances for the side.

Stevens will officially join the Super Rugby team in August, ahead of the start of the Currie Cup tournament.

"Matt has a burning desire to be a part of our Currie Cup campaign and is a great signing for us," Sharks director of rugby Jake White said.

"With our front row being unavailable during the latter part of the year, due to Springbok commitments, Matt's experience and knowledge will prove invaluable.

"The youngsters in our squad can take confidence from having a senior guy in the front row."