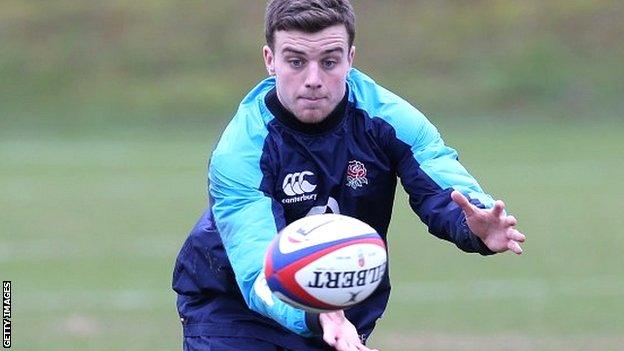 Bath fly-half George Ford is in line to make his England debut in Saturday's key Six Nations match against Ireland at Twickenham.

The 20-year-old has been named in the squad as cover for Owen Farrell.

England head coach Stuart Lancaster said: "We feel that the time is right to include George Ford in the squad.

"We have successfully integrated many young players over the last two years. George is the next exciting talent to make his mark in the senior squad."

"George Ford has been tipped for great things from an early age. He was the youngest winner of the IRB Junior Player of the Year award and, despite being two years Owen Farrell's junior, it was Ford who played at number 10 for the England U20s, with Farrell in the centre.

"But, while Farrell has excelled in recent years, Ford was unable to get regular rugby at Leicester. Since his summer move to Bath, however, he has excelled, and now looks set to compete with Farrell for the England fly-half shirt for many years to come."

As expected, Bath tight-head David Wilson replaces injured prop Dan Cole. The XV to face Ireland at Twickenham will be confirmed on Thursday.

He spent four years with the Tigers before joining Bath last year, and has represented England at U18, U20 and Saxons level.

Following their last-gasp defeat in the opening match against France in Paris, England revived their campaign with a 20-0 victory over Scotland at Murrayfield on 8 February.

Ireland have begun in impressive fashion with two comprehensive wins in Dublin, 28-6 against Scotland and 26-3 over Wales.

Ford was brought into the England Elite Player Squad in January, as a replacement for the France-bound Toby Flood.

He was not included in the match-day squad of 23 for England's first two Six Nations matches, but did travel to Paris on the opening weekend as a non-playing reserve.

Ford's father Mike said he was delighted at the prospect of his son representing England.

"He's had a lot of boxes to tick, a lot of hoops to jump through to get where he is, and he has done that remarkably well. If it is his time this Saturday, then I think he fully deserves it," he said.