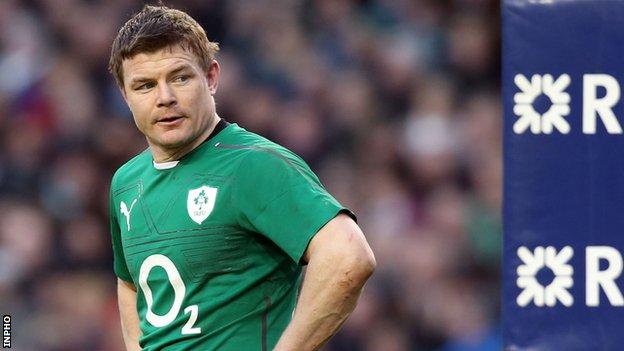 Brian O'Driscoll will equal the record for international caps on Saturday after being passed fit for Ireland's Six Nations game with England.

O'Driscoll, 35, had been bothered by a stomach upset on Tuesday but was able to train fully on Thursday morning.

Coach Joe Schmidt's decision to name an unchanged starting line-up from the win over Wales was no surprise.

Ulster's Henderson will provide both second-row and back-row cover while Leinster flanker Murphy is in line for his first cap after producing an impressive season for the current Pro12 champions.

Former skipper O'Driscoll will equal ex-Australia captain George Gregan's world record of 139 Test appearances by playing at Twickenham, by winning his 131st cap for Ireland in addition to eight for the British and Irish Lions.

The Dubliner could then surpass the record against Italy in his home city on 8 March.

"He could have trained on Tuesday, but he just was still feeling the after effects of an illness," said Schmidt of O'Driscoll's fitness.

"With his experience and know-how he's in a good position to know what he needs, and he brought that to bear. He's fully ready to go now."

Ireland can complete the Triple Crown after two victories in Dublin - 28-6 against Scotland and 26-3 over Wales.

It is England's first home game after losing to France and beating Scotland.

Ireland captain Paul O'Connell says the team is expecting a much tougher test than the one posed by Wales last time out.

"The Wales we beat last week were a little bit off their best," O'Connell told a news conference on Thursday.

"It's going to be a big step up this weekend. The confidence isn't sky-high, it's realistic."