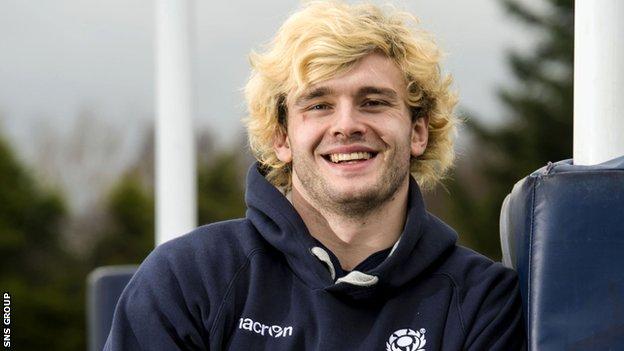 Richie Gray aims to prove he is worthy of a first Six Nations start this season when Scotland take on Italy in Rome on Saturday.

The 24-year-old lock is back in Scott Johnson's plans, having been dropped from the match-day squad for the 20-0 loss to England at Murrayfield.

"I suppose I need a big performance in the jersey," he told BBC Scotland.

"I've been given a chance in the starting line-up, so I need to take it with both hands."

The 24-year-old will win his 35th cap against the Azzurri in what has been widely billed as a Wooden Spoon decider.

I've been quite upset and I would have liked to have been involved, but you take it on the chin...

Both teams have lost their opening two matches, with the Scots falling to a 28-6 defeat in Ireland on the first weekend of action.

"However, it's a pretty big match this weekend and things haven't gone to plan. We're the first to hold our hands up and say it's not gone well.

Interim head coach Johnson said Gray's return was down to the lock returning to his club Castres and ironing out some issues with his performance.

And the Scottish line-out has been a real mess in the first two games, with hooker Ross Ford losing his place to Scott Lawson.

Gray, who featured as a second-half replacement in Dublin, will partner Jim Hamilton in the second row as Tim Swinson drops to the bench.

"The coaches for certain games have their preferences - they like combinations and in the first two games I just wasn't part of that," he added.

"I just need to take my opportunity.

"First and foremost it's about playing as well as you can for the team. It's about doing your role, knuckling down and getting things right and whatever happens, happens after that.

"It's been quite disappointing. I've been quite upset and I would have liked to have been involved, but you take it on the chin, you get on with things and you move on.

"It's a huge game. We've heard what's gone in the press. It's backs-against-the-wall stuff.

"The Italians will be targeting us. They're at home and they'll see it as a win for them - and rightly so - on the form of this championship so far. But we go into this game wanting to show what we can do.

"The biggest disappointment of the first two games is the fact that we've not done that. We've not played to our full ability. There's a burning desire for everyone in the squad to go out and make things right."