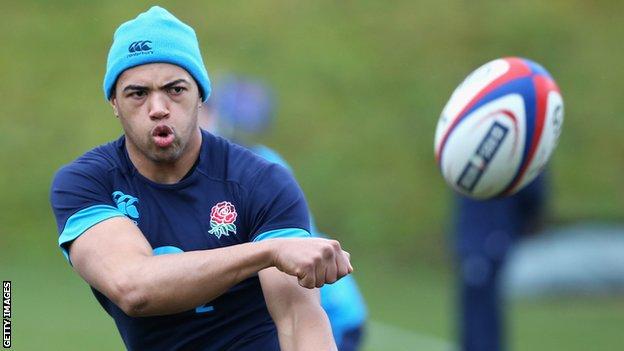 England centre Luther Burrell has said lining up against Ireland's Brian O'Driscoll in the Six Nations Championship will be a "huge honour".

Burrell, 26, scored tries in his first two internationals against France and Scotland, and faces O'Driscoll, who retires this summer, in Saturday's Six Nations match at Twickenham.

"He's a massive icon in Irish rugby, and he's done a lot for the game," Burrell told BBC Sport. "This weekend will be his 139th international cap, and that's a magnificent stat."

Huddersfield-born Burrell marked his England debut in Paris with a second-half try against France and then powered over during the 20-0 victory over Scotland at Murrayfield.

He added: "I've played in some big games for Northampton against some of these quality players, but the step up to international rugby is something else.

"Playing against Ireland, that's going to be another challenge altogether, so if I can get through this OK I'll be able to look back and be a proud man."

Looking ahead to his first Twickenham appearance for England, he said: "It's going to be very, very special.

"I think the whole of Huddersfield is planning on coming down, and it's something I'm going to cherish for the rest of my life."

Leinster's O'Driscoll, 35, is one match away from equalling former Australia captain George Gregan's record of 139 Test match appearances, having played 130 times for Ireland and eight times for the British and Irish Lions.

He missed training on Tuesday because of illness, but is expected to recover in time for the weekend, when he will play his 13th and final game against England.

But Burrell will not be daunted by facing one of the greatest midfield players of his generation.

"I've got the utmost respect for him, and it's going to be a huge honour to play against him, but come game time that's going to have to go out of the window and we'll be enemies," he said.

"Hopefully I'll be able to have a chat with him and a catch-up after the game."

Burrell is taking heart from his last meeting with O'Driscoll, when Northampton shocked Leinster in the Heineken Cup in December, and will be looking to impose himself early in the game.

"I'm not going to do anything that will be detrimental to the team," Burrell said. "But if it comes that I've got an early touch on the ball and running down his channel, then I'll do that at 100%, as I will when it comes to defending."