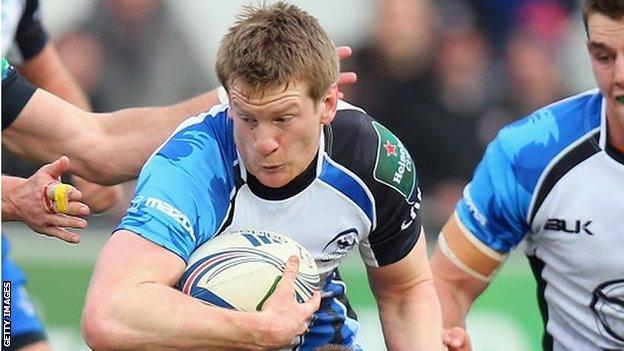 London Irish have signed Connacht centre Eoin Griffin on a two-year deal from the start of next season.

Galway-born Griffin, 23, has made 62 appearances for Connacht since joining the province in 2009.

Last year he was part of the Emerging Ireland squad that took part in the inaugural Tbilisi Cup in Georgia.

"Eoin is a big, physical centre with great feet and distribution skills, so he will fit in well with our style," said director of rugby Brian Smith.

"The form of our centres this season has been superb so competition for places next season will be fierce, which is what every coach is after.

"It is all great news in building the squad for the future to drive the new London Irish vision of being able to compete for top league status and silverware."

Griffin said he was eager to take up the challenge of playing in England.

"London Irish's new owners have an exciting vision for the future of the club and I'm very much looking forward to playing a part in turning that into reality," he added.

"Connacht Rugby is all I have known and I am extremely grateful for the opportunities the province has given to me."