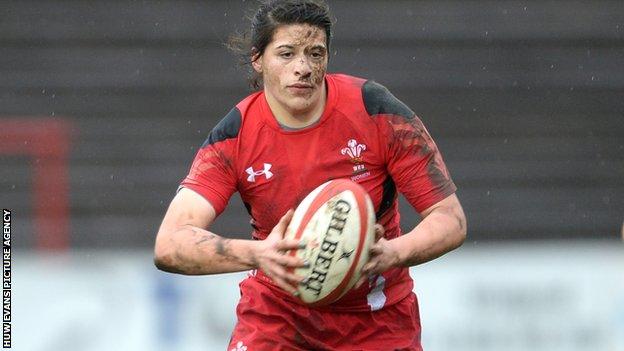 Not only do the Welsh girls need a championship victory after the two opening defeats to Italy and Ireland but unbeaten France are in Wales's World Cup group, a competition the French are actually hosting in the summer.

It is going to be tough for Rachel Taylor's side having to face a confident French side who have won their opening two matches against England (18-6) and Italy (29-0).

Wales have not had a disastrous opening to the championship by any means and their two defeats against Italy and Ireland. came through tries late in those games.

But there will be a difference in confidence levels on Sunday and France will now have half an eye on winning the Six Nations title and possibly the Grand Slam.

After Wales, France still have to play Scotland, the weakest team in the tournament, and Ireland, also unbeaten so far, have got to travel to meet the French.

What stands out for me is that Italy, who only just beat Wales, leaked five tries against France.

And a big concern for Wales is that France's key player, scrum-half Marie-Alice Yahe, is back after missing the opening two Six nations rounds through injury.

Yahe runs the show and is helped by the fact she operates behind a powerful French pack who are capable of bullying their way over the line through scrum and line-out drives.

Wales' problem against both Italy and Ireland was that they found themselves stuck in their own 22 for long periods in the second half and were eventually forced to leak decisive tries.

One of the key weaknesses in the women's game is the inability for teams to ease pressure with touchline kicks. We don't have the Leigh Halfpennys who can relieve pressure with a 60-metre touch-finder.

The good thing for Wales is that France are coming to the Talbot Athletic ground and classically like the French men do not usually travel particularly well. They are not great fans of the mud and rain.

They much prefer playing in compact home grounds which they fill to capacity, ensuring they get great support.

Though Wales do have a light pack in relation to France they do have some good strong runners, especially in midfield where centres Robyn Wilkins and Rebecca de Filippo can pose problems for defences.

Wales created chances against Italy and made a four or five clean line breaks but just did not seem to be able to finish them off, which of course is crucial at this level.

If Wales could pull off a victory it would be amazing for team spirit, not only for this Six nations, but ahead of the forthcoming World Cup.

Wales are in a difficult pool for that with Australia, South Africa and France.

A win against France at the weekend would give the Welsh girls some self-belief ahead of the summer and they are also very capable of beating South Africa, who are pretty inexperienced and not quite in the same league as the men.

So there is no reason why Wales cannot get out of that World Cup pool. They just have to start finishing off their chances and gain a bit more confidence.

The Six Nations is a building block to that World Cup so any positive result against the French would be very welcome indeed.

Meanwhile, on Saturday the England v Ireland women's game is live on the BBC through the red button from Twickenham at 18:20 GMT following the main Six Nations match.