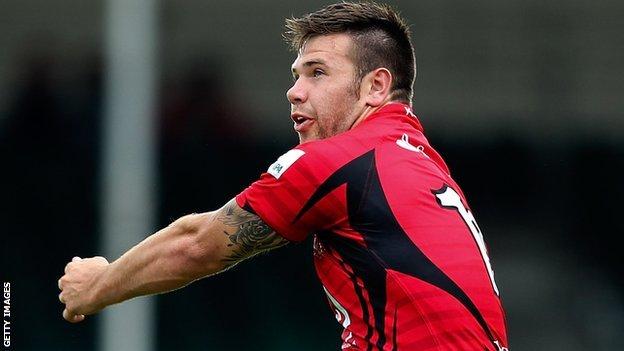 Jersey fly-half Aaron Penberthy is set to make his long-awaited return from injury when his side face his former-club Cornish Pirates on 2 March.

The 21-year-old has not played since suffering a broken leg in November.

Penberthy told BBC Radio Jersey: "I'm really looking forward to it and hopefully I can get a starting place.

"I'm pretty much match fit now. It's been agony, but once I was able to get my boots back on, it all came back nicely and I'm ready and raring to go."

Penberthy was one of three players who joined Jersey from Pirates in April last year.

He had hoped to make his return against Plymouth Albion on 14 February, but the match was postponed because of a waterlogged pitch.

"I was gutted my first game back was called off, but it should be a good game against Pirates," Penberthy said.

"It will be good to go back down to Penzance, see a few old mates and hopefully do a job on them.

"I think the target for the Plymouth game would have been for me to get to half-time and then see how I felt, so fingers crossed the coaching team will let me have my chance again."