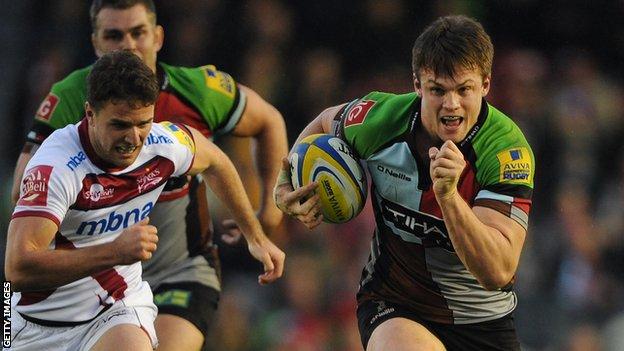 The quartet, who will move from the academy to the senior squad this summer, will remain at the Twickenham Stoop until the summer of 2016.

"They have all played a vital role for the club already in their careers," Quins academy boss Tony Diprose said.

"I have no doubt they will continue to play their part in keeping Quins at the top of the domestic and European game."

All four have played senior rugby for the Premiership club this season, with centre Stuart, 22, making his first start earlier this month.

Lock Twomey, 21, centre Sloan and 21-year-old flanker Clifford, who was nominated for the IRB Junior Player of the Year award in 2013, were all part of the LV= Cup-winning campaign last season.

Clifford captained England to triumph in the Junior World Cup last year, while Sloan, 19, was also a member of the side.

"Harlequins is a great club with a great bunch of guys and I feel lucky to be learning alongside them on a daily basis," Clifford said.

"I'm looking forward to the challenges the rest of this season, and next, will present as I continue to develop and push for more first-team appearances."