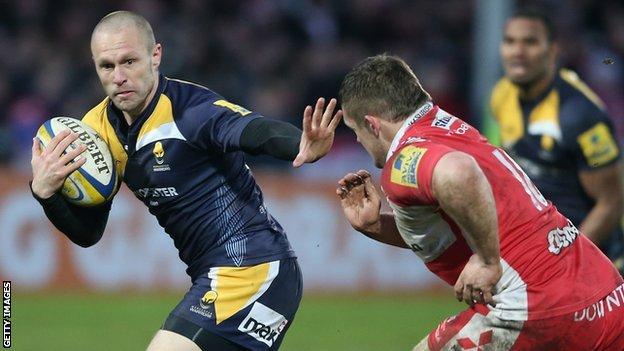 Worcester Warriors fly-half Paul Warwick hopes the club's recent improvement in performance level will help him keep his place in the team.

"We seem to be really competitive in the pack - that obviously benefits me."

If Worcester fail to win either of their next two fixtures, at home to Sale and away to Harlequins, they will have gone a whole calendar year without winning in the Premiership.

The current run of 19 straight league defeats is a club record.

He added: "Although we don't have a win to cling to, there's huge belief we are on the right track now and we will be competitive - but consistency is still something we're searching for."

Lamb, 27, arrived at Sixways on 10 February but has yet to make his debut, with Warwick retaining his place in the XV for the 30-14 defeat by Northampton on Saturday.

And the former Munster and Stade Francais stand-off insists he is not fazed by the added competition.

"I'm not out-of-joint about it," he told BBC Hereford & Worcester. "He's a good bloke and he's got some good attributes.

"It's competition and that usually brings the best out in people."

Warwick has kicked 28 points and scored one try for Warriors in all competitions so far in 2013-14, but has recently seen full-back Chris Pennell take over the kicking duties.

That has left the Australian able to fully concentrate on the other aspects of his game, which he admits have suffered with the difficult run of results the club have endured.

"Playing 10, you're relying on speed of ball and pack domination and I guess we've suffered [in those areas] in the past - whoever's played 10," Warwick explained.

"I've played the last two weeks and it's nice to get consistency playing week in, week out.

Over the course of the season there have also been several changes made in the scrum-half position, with Jonny Arr,Paul Hodgson and Samoa international Jeremy Su'a all filling in at different times.

"They all bring something different," Warwick said. "Jonny seems to have a mixture of everything, whereas Paul brings a lot of energy in defence and Jeremy likes to attack.

"It's interesting but, as 10s, we have a rapport with all of them and you have to adjust your game accordingly. It's a hotly contested position."