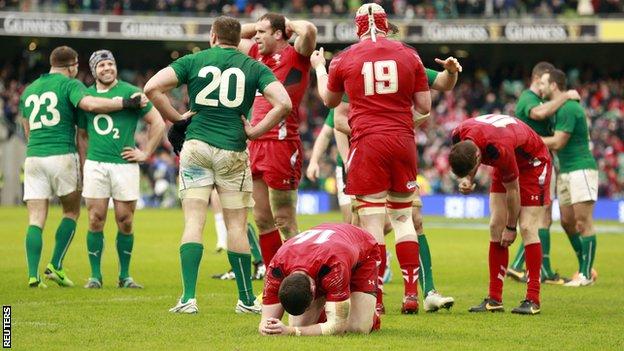 Warren Gatland has warned his misfiring squad that another poor show in the Six Nations clash with France could signal the end of their Wales career.

Wales must win in Cardiff on Friday night to reignite their title defence after the heavy 26-3 loss in Ireland.

Justin Tipuric is knocking on the door and we could have played Sam Warburton at six, and Dan Lydiate hasn't been as sharp as he has been

"Hopefully those guys will respond to that," Gatland told BBC Wales Sport.

"If they don't, we've been talking about the next 12 months... and for some of them they don't want this to be maybe their last game for Wales."

The dominance that Ireland displayed over Wales, who had won their opening game 23-15 at home against Italy, has seen Gatland tinker with his starting line-up to face the unbeaten French.

British and Irish Lions scrum-half Mike Phillips has been dropped to the bench in favour of Rhys Webb.

The return to fitness of Luke Charteris has seen the Perpignan lock restored to the starting XV, while injuries to centres Scott Williams and Jonathan Davies sees George North switched from wing to midfield, Liam Williams taking the wing berth.

Gatland accepts that the defeat in Ireland may prove to be just a blip, but he warned that he is prepared to begin an overhaul of his squad if necessary.

"If individual performances aren't good enough then we need to make changes, and by making changes someone else comes in and says, 'I've got this chance now and I'm going to grab it with both hands and not let you back in'.

"Players that have played so well for you, you want to give them the chance to redeem themselves or do you make the changes?

"I've spoken to a couple of front-rowers about their performance and the pressure that they're under.

"Justin Tipuric is knocking on the door and we could have played Warby [captain Sam Warburton] at six, and Dan Lydiate hasn't been as sharp as he has been in the last couple of years... he knows he needs a big performance as well.

"I don't think those forwards are under any illusion about how big this game is for them on Friday night in terms of their own personal performance and the team performance."