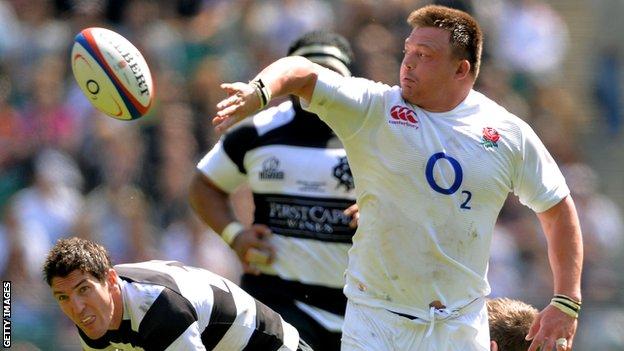 Bath prop David Wilson will replace the injured Dan Cole at tight-head for England in Saturday's Six Nations match against Ireland, while the uncapped George Ford will be on the bench.

Wilson only returned to action last weekend - lasting 47 minutes - after two months out because of injury.

March 2012 - Two days after his 19th birthday, wins his first silverware, scoring 16 points for Leicester in their LV Cup final win over Northampton

Ford, who has amassed 163 points for Bath in 14 Premiership appearances this season, is a former International Rugby Board junior world player of the year and played alongside incumbent England fly-half Owen Farrell for England Under-20s.

Asked if he was confident Ford could cope with potentially making his debut off the bench in such a key role as the number 10 shirt, Lancaster said: "You can never predict these things, to be honest.

"We'll wait and see how the game unfolds, but if he does get his opportunity we know he's ready. He's had three weeks with us.

"It is a key leadership position. He's got to feel comfortable, he's got to understand the systems and structures and then he's got to lead and deliver them.

"I think his confidence has grown through the season with Bath and he played extremely well last week [against Exeter], so we think he's ready."

The younger Ford began his career at Leicester and became the youngest union player to make his professional debut when he appeared in a cup match aged only 16 years and 237 days.

Tight-head Wilson says he has "no idea" how long he will be able to last against Joe Schmidt's Ireland side, having played fewer than 50 minutes of rugby since returning from a calf injury.

"I've got no idea how long I can play for - maybe 50 or 60 minutes?" said Wilson, who made his return from injury in Bath's 27-23 Premiership victory at Exeter last Saturday.

The former Newcastle player is preferred to Sale's Henry Thomas, 22, who is on the bench.

Wilson, who made his international debut against Argentina in 2009 but has only started in seven of his 31 caps, is considered to be the better scrummager of the two.

Lancaster admitted it was "not ideal" to bring him back so quickly after injury, but welcomed the return of an "experienced international".

England go into their first home fixture of the 2014 Six Nations campaign on the back of a resounding 20-0 victory over Scotland, but face an Ireland side yet to concede a try in the competition after victories over Scotland and last year's winners, Wales.