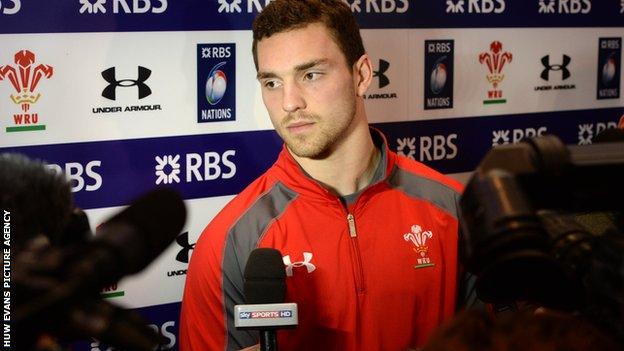 George North insists he is comfortable moving from wing to centre for Friday night's Six Nations clash with France.

The Northampton Saint, who has 37 caps on the flank, answered an injury crisis in the Wales backline to partner fellow British and Irish Lion Jamie Roberts.

It sets up a potentially explosive midfield battle with French centres Mathieu Bastareaud and Wesley Fofana.

"To put on the Welsh jersey [in] any position is happy days. So for me it's another challenge," said North.

"I've started there for Northampton, played in there a lot recently and trained there - something to look forward to."

North comes it at centre with Scarlets' pair Jonathan Davies and Scott Williams out injured.

Liam Williams comes in for North on the wing as one of three changes from the 26-3 defeat to Ireland, with Mike Phillips dropped to the replacements bench in favour of Rhys Webb, while Luke Charteris comes back in to the pack.

"Wing is ideally where I have been playing for the past few years … but every day I get more comfortable," added 21-year-old North.

Wales head in to the clash against unbeaten France determined to win to rekindle their hopes of a third straight championship.

Much could rest on the match-up in the centre and North realises the talent France have in Bastareaud and Fofano.

"Fofano - he is a ball player, he's got great foot work and a turn of pace so it's a good front-up for me and Jamie."

North says the players are also motivated by their defeat against Ireland and believes the title is still up for grabs.

"We have been spurred on by the loss [to Ireland] and hopefully we can turn a corner on Friday night," said North.

"We can only do our best. We need a result in our favour as well, but for us we have to make sure our own ship is right.

"It's not over until it's over as we proved last year."