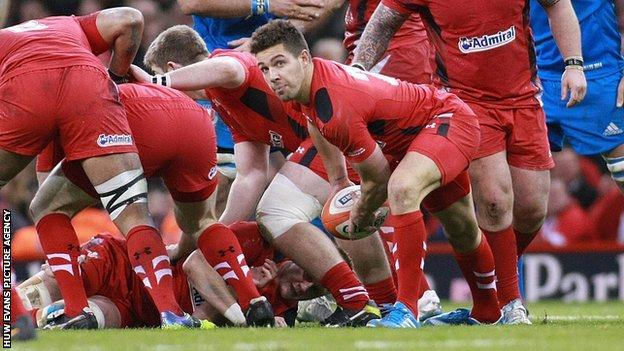 Wales coach Gatland will start Rhys Webb in Cardiff, with Phillips on the bench after a poor display in the 26-3 defeat against Ireland on 8 February.

"As Warren Gatland said, Mike probably didn't have the greatest of games, so give Rhys Webb a chance," Peel said.

"He's [Phillips] been the number one choice for a while and he brings a lot of experience, he's a British and Irish Lions Test nine.

"We're obviously still in the hunt for a championship but we're also a year and a bit from the World Cup, so it's important to give everyone a fair crack of the whip."

Peel, 32, who won 76 Wales caps and played three Tests for the Lions, believes giving 12-cap Webb the chance to shine in such a big game will help develop the 25-year-old Osprey.

But Sale Sharks scrum-half Peel does not think that this will end Phillips's Wales career.

The 31-year-old, who has 82 caps, had a turbulent finish to 2013, as he was sacked by Bayonne in October, before joining follow French Top 14 club Racing Metro in December.

"Mike has missed out on this game, as Warren alluded to he didn't have the greatest of games over in Dublin," Peel added.

"To be fair he hasn't played much rugby really with everything that has gone on this year for him.

"It was a long summer, he's come back and swapped clubs and so forth and it's been a bit of a difficult one.

"With Rhys Webb playing well the last couple of weeks he deserves a go, whether he'll oust Mike now completely I'm not sure.

"It depends on Rhys and how he takes the chance, obviously it's a big opportunity for him.

"I'm not sure whether it's giving Mike a break and a bit of a kick in the backside - then we'll see what happens against England.

"It's just down to this game; I think it depends if Webby goes well this week then he might keep his chance against England but we'll see."

While Phillips is a more physical player than his replacement, Peel is interested to see what Webb can bring to the scrum-half position for Wales.

"I don't think it changes the game plan as such, the game plan is sort of set and the players are picked to abide by that," Peel said.

"The different dimension of play is that Webby is a bit quicker, a bit more nippy I'd say, but it also puts a lot of focus now on [fly-half] Rhys Priestland as he's become the more experienced of the two.

"Perhaps in the past he and Mike have shared responsibilities, or Mike has taken more responsibility, I think a lot is put on the shoulders of Rhys Priestland now to really run that game as the senior partner at half-back."