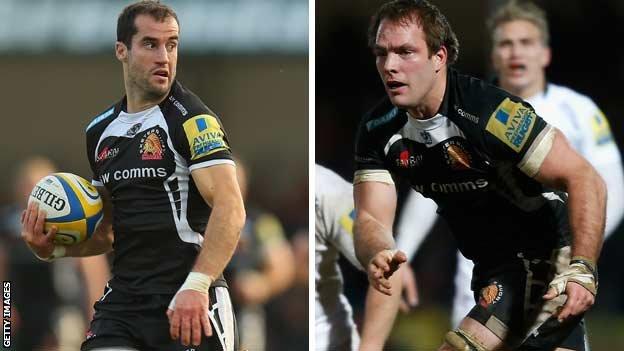 Exeter Chiefs scrum-half Haydn Thomas and back-rower Kai Horstmann have both signed new one-year deals to keep them at Sandy Park next season.

Thomas, 31, and Horstmann, 32, are two of the more experienced members of a youthful Chiefs squad.

"The other part is we're really pleased with the kind of men they are and their personalities around the squad."

I'm really pleased these two guys have re-signed with us

Baxter added: "When I've been watching the squad work together, I think they're two very important people to us."

Horstmann suffered with injury last season after arriving from Worcester, but has made a significant contribution in the current campaign.

Thomas, who was called up to the England squad to face the Barbarians last year, has himself struggled with injury this season, but Baxter expects him to provide strong leadership to the young scrum-halves at the club.

"It's great to see Kai fit for the whole season this season and getting as much game time as he has," added Baxter.

"I think he's proved what a good Premiership performer he is.

"Haydn has been a bit unfortunate with a couple of niggly injuries this season, but we know he's a solid Premiership performer.

"He's in a position with a lot of competition now with Dave Lewis, Will Chudley and Stu Townsend starting to come through from our academy, but his experience in the Premiership is invaluable in keeping a strong squad.

"I'm really pleased these two guys have re-signed with us."