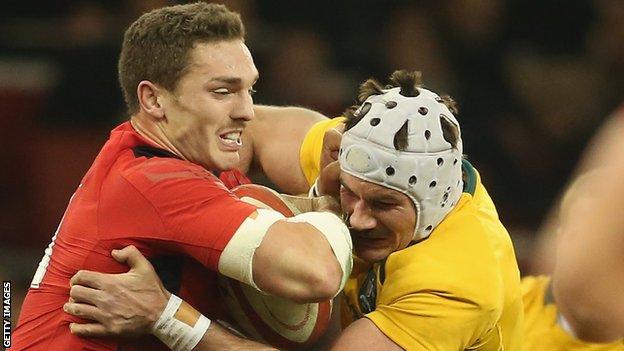 Defence coach Shaun Edwards has warned Wales' injured centres they should be worried by George North's switch from wing to midfield.

He will face powerful Frenchman Mathieu Bastareaud, but Edwards has faith in 6ft 4in, 17st North.

"I'd be pretty worried about my position if I saw George North in my jumper," said Edwards.

Davies has established himself among the world's leading centres alongside regular partner Jamie Roberts.

However, the 25-year-old has not played since picking up his injury against South Africa in November, and in his absence Williams has also made a name for himself.

Williams, 23, was himself forced off during Wales' 26-3 second-round defeat by Ireland, and that has handed North a chance to make his mark in midfield.

North played much of his age-grade rugby at centre and has appeared there for Northampton this season as cover for injuries.

Williams's injury against Ireland prompted a reshuffle in which North moved to centre and Liam Williams took over on the wing.

A similar, injury-enforced switch took place when Wales lost to Australia in November 2013.

North has another chance to impress as Wales seek to recover from their 26-3 defeat by Ireland in Dublin in the second round.

That loss was a blow to Wales' bid for a record third successive Six Nations title.

And Edwards believes North can help there while his ex-Scarlets team-mates Scott Williams and Davies are absent.

The Wales assistant coach said North was "pretty sensational" during the 20 minutes he spent at centre against the Wallabies.

But Edwards also acknowledges North and midfield partner Jamie Roberts will be up against a talented duo in star France back Wesley Fofana and Bastareaud.

"He's [Bastareaud] certainly big and Fofana's not too bad either, is he? He's a real quality player."

Edwards says Wales must also deal effectively with the threat posed by number eight Louis Picamoles' driving play and the visitors' defence, which has been "pretty strong" this campaign.