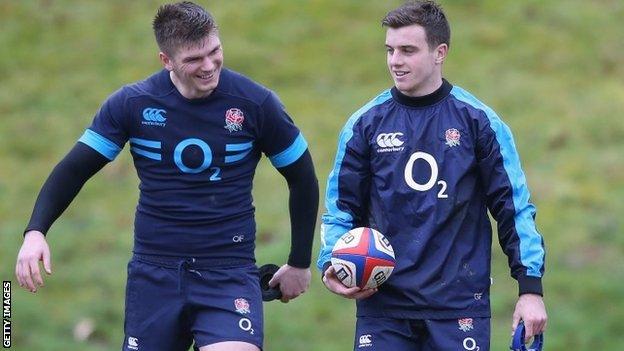 Owen Farrell says he is relishing having his "best mate" George Ford in the England squad for the first time.

Ford, 20, could make his international debut in Saturday's Six Nations game against Ireland after being named on the replacements bench.

"There was never any doubt George would put the work in to get here, and it's brilliant that he's here now," Farrell, 22, told BBC Sport.

The two fly-halves first shared a rugby pitch around a decade ago.

"I think we played against each other, as kids, when I was about 12 or something," remembers Farrell.

"Then a few years later, his dad - Bath head coach Mike - was coaching Saracens and my dad - England assistant coach Andy - signed there, and we ended up living opposite each other. We were best of mates then, and have been playing together ever since."

Despite there being an 18-month age gap, the two went on to play together throughout the England age groups, often with the younger Ford at 10 and Farrell alongside him at inside centre.

"We became best mates and then played together for England Under-16s, 18s, and 20s, and nothing has changed."

Ford says he is constantly learning from Farrell, who himself made his debut two years ago at the age of 20.

"The amount of stuff I've picked up from him, especially over the last few years, has been unbelievable," Ford added. "He's played brilliantly well for England.

"As a young lad you watch England every game and Owen has been outstanding. To keep his position so consistently well is unbelievable. He's been brilliant this week for me, and he's a great player to learn from."

Both Ford and Farrell have been destined for great things from an early age. As well as rising through the England ranks, Farrell made history in October 2008 by becoming the youngest ever player to appear in English professional rugby union, playing for Saracens shortly after his 17th birthday.

A year later, that record was broken by 16-year-old Ford at Leicester.

That is a sentiment echoed by Ford, who has flourished since leaving Leicester for Bath in the summer.

"George Ford has been tipped for great things from an early age. He was the youngest winner of the IRB Junior Player of the Year award and, despite being two years Owen Farrell's junior, it was Ford who played at number 10 for the England U20s, with Farrell in the centre.

"But, while Farrell has excelled in recent years, Ford was unable to get regular rugby at Leicester. Since his summer move to Bath, however, he has excelled, and now looks set to compete with Farrell for the England fly-half shirt for many years to come."

"We're quite similar," he continued. "We've always had a good relationship, but at the same time we've been quite competitive, and we've always wanted to win things.

"We both want the [England fly-half] shirt at the same time. But it's not going to cause any fracture in the relationship. I can push him and he can push me. If he's starting, I'm going to do my utmost to make sure he gets the best preparation."

England have lost nearly 200 caps of experience at fly-half in the last two years, with Jonny Wilkinson, Charlie Hodgson and Toby Flood all departing the international scene.

And while Freddie Burns, for one, may still return to the fold, it seems Farrell and Ford could joust for the 10 jersey for the best part of the next decade.

"A lot of people have said that," smiles Ford. "But it's only just happened. We're just focusing on the here and now, and that's trying to put each other in the best position to go out there and perform against Ireland."

And while Ford says he is "definitely ready" for his first cap, he admits the prospect of facing Ireland's much-vaunted midfield is a bigger challenge than anything he has experienced so far in his career.

"They have some unbelievable players, with [Jonny] Sexton, [Gordon] D'Arcy and [Brian] O'Driscoll," he said.

"It's definitely a step up from what I've been playing recently, but the boys in our team are playing near their best as well. I think it will be a great game."