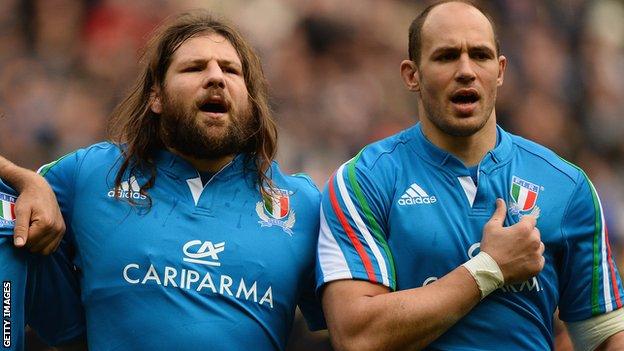 Martin Castrogiovanni knows Italy must cope with the weight of expectation when Scotland visit Rome on Saturday.

Both sides are without a win in the Six Nations, with Italy losing in both Wales and France.

The prop, who will join captain Sergio Parisse in winning an Italian record 104th cap, said: "We didn't have pressure on us when we played in Cardiff and then Paris.

"Now, we're at home and everyone expects us to win."

Parisse and Castrogiovanni will surpass the retired Andrea Lo Cicero's record number of appearances for Italy, 12 years after making their debuts.

Coach Jacques Brunel has made three changes to the starting line-up that lost 30-10 in Paris.

Winger Angelo Esposito returns in place of Tommaso Iannone for his second cap.

The other two changes are in the back row, where Roberto Barbieri and Alessandro Zanni replace Mauro Bergamasco and Francesco Minto.

Adding some extra spice is the inclusion of former Scotland under-20 fly-half Tommaso Allan, who will make his sixth appearance for the Azzurri.

Scotland have not won in Rome since 2006 and the visitors prop up the tournament table following one-sided defeats to Ireland and England.

However, the Scots did beat Italy twice last year, winning comfortably in Edinburgh and then edging a summer Test in South Africa.

And Brunel said he has readied his side for a battle against wounded opponents in what is widely seen as a Wooden Spoon decider.

"Last year we conceded 34 points at Murrayfield; that's something we have to take into consideration," said Brunel.

"Recent results haven't been going Scotland's way, but they're one of the teams we seem to have most difficulty with.

"They have character and always play with determination. They will be tough opponents."

Italy have scored three tries so far - three more than Scotland - and centre Michele Campagnaro is a potent force in attack.

"We have worked as always on the defence, which I think has improved from last year even if there are still too many individual errors," added Brunel.

"We still have to learn to take control of games when we can.

"In Wales, we conceded too many points at the beginning, and in France we created a lot without finishing off as many as we should. But creating chances of scoring a try is something positive.''