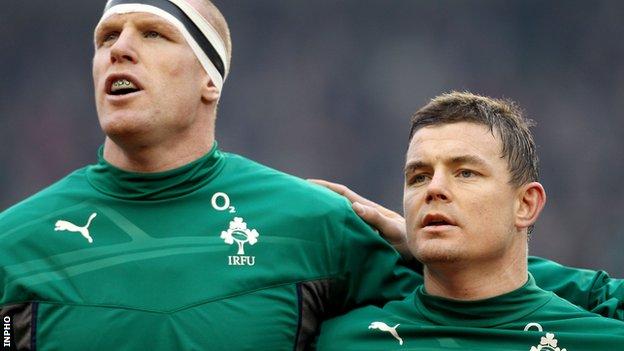 Paul O'Connell has hailed the "incredible" impact Brian O'Driscoll has had on Irish rugby.

O'Driscoll, 35, will equal George Gregan's world record of 139 Test caps when he plays in Ireland's clash with England at Twickenham.

Barring injury, O'Driscoll will almost certainly beat that record before he retires after this year's Six Nations.

"He's spread confidence across the whole set-up. You see what guys have become under him," said O'Connell.

"They've realised this is how you need to play the game, you need to be the complete player.

"There's a lot of people who have come through now almost in the mould of Brian, in the way he's carried himself."

Captain O'Connell believes the legendary centre will retire at the end of the season having dragged Ireland, at times kicking and screaming, into the era of the ultra-professional.

O'Driscoll made his international debut in 1999 and has been an Ireland fixture ever since.

Munster talisman O'Connell says the 35-year-old's dogmatic approach to defensive excellence, notwithstanding his game-breaking acumen, have opened Ireland's eyes to a level of rugby never seen before.

While there is understandably some trepidation among Ireland supporters about the looming post-O'Driscoll era, O'Connell believes his impact will continue within the Irish squad following his retirement.

"When Brian finishes, that confidence will remain in the Irish set-up because I think a few players have moulded themselves on him a little bit and realised this is what you need to be to be the all-round rugby player," said O'Connell.

"He's brilliant at the ruck, has a great work ethic, and he's a very unselfish player as well.

"He's actually a very understated and quiet guy behind it all as well."