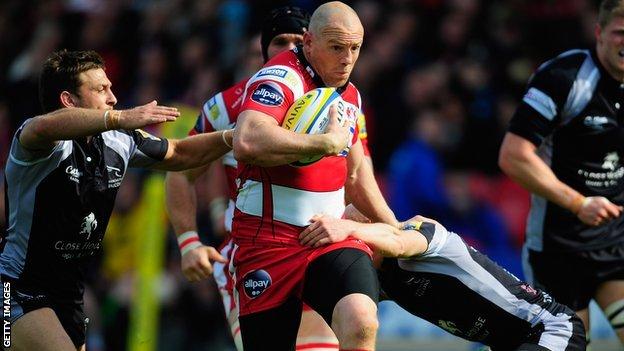 Gloucester centre Mike Tindall has received praise for his "character and leadership" as he prepares to make his 200th Premiership appearance.

The 35-year-old will reach the milestone as captain, in the game against Harlequins on Saturday.

"The fact is that he's not just making his 200th appearance, he's actually playing very well at the moment," said director of rugby Nigel Davies.

"If he maintains those standards, it says a lot about his character."

Tindall made his Premiership debut for Bath against Bristol in the 1997-98 season.

He arrived at Kingsholm in 2005 and alongside his 174 games for the Cherry and Whites, he has 75 caps for England was part of the World Cup winning team in 2003.

Tindall was set to be released by Gloucester in the summer of 2012, but he was offered a new dual role as player-coach under the incoming Davies.

And the Welshman told BBC Gloucestershire: "Mike's influence on the team is very important because they are a young group and we're trying to develop their leadership.

"There's not many natural leaders in there, so someone like Mike adds a lot of value to the team in terms of how he energises and drives the group."

Tindall's current contract is set to expire this summer and, having made 17 appearances so far this season, Davies expects the centre to be interested in re-signing again.

"I'm sure he'll be knocking at my door sooner or later," said the Gloucester boss. "We'll look at the whole piece and decide what's right for Gloucester."