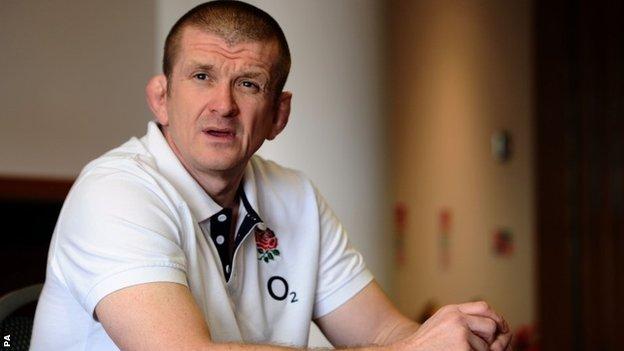 England coach Graham Rowntree says Ireland's Brian O'Driscoll is an "icon" of the game as the centre prepares for his final international at Twickenham.

O'Driscoll, who is retiring this summer, will win his 139th Test cap, equalling the world record.

Forwards coach Rowntree, who coached O'Driscoll with the Lions, said: "Beating us will mean everything to him. What a player. He's an icon.

"He's a thoroughly professional player and I really enjoyed working with him."

He added: "As a man he's exceptional. You hear the way Owen Farrell, Luther Burrell and Billy Vunipola speak about him, you can tell the respect they have for him."

O'Driscoll, who has met England 12 times in his career, has scored a record 26 Six Nations tries.

No player has scored more tries for Ireland against England than the 35-year-old Dubliner, although all three of his efforts have come on home soil.

Rowntree also has respect for another Ireland and Lions stalwart, lock Paul O'Connell.

"He's very diligent and backs himself under pressure. He has an aura about him that they will feed off tomorrow."

England are chasing the Six Nations title, but cannot win the Grand Slam after losing to France. Ireland are yet to lose and will clinch the Triple Crown if they win in London.

"Ireland have got challengers across the board, from the driving maul to the carrying game," Rowntree said. "Their defensive breakdown, Peter O'Mahony has been exceptional. We've looked at all those threats - you have to. Every opposition brings something different. But I can assure you we'll be ready tomorrow."

"It's a huge blow, Dan's been a mainstay for us for the past four years but we're very fortunate to have Wilson coming back from injury," Rowntree said.

"He was in the form of his life in the autumn series and he's come back from injury, he's fit and has fitted straight back in. His adrenaline is pumping. A full house here against Ireland - I'm sure he'll be flying."