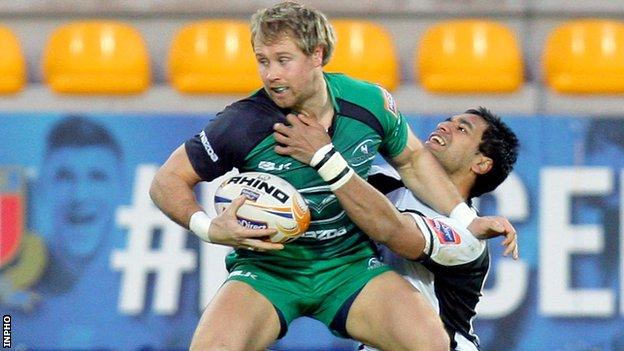 Connacht moved up to 10th in the Pro12 table after holding on to beat basement side Zebre in Sunday's game in Italy.

Touchdowns from Rodney Ah You and Kieran Marmion plus a penalty try helped Connacht lead 22-0 at half-time.

Giovanbattista Venditti, Samuela Vunisa and Dries van Schalkwyk notched Zebre's tries but Connacht were never in any danger of being caught.

Connacht and Zebre have swapped bottom position in the Pro12 table in recent months and both teams knew the importance of Sunday's game.

However, it was the visitors who took decisive control in the opening half to virtually end the match as a contest.

After Griffin's try following the restart had sealed Connacht's bonus point, their level of performance began to drop.

Tries from Venditti and Vunisa narrowed the deficit to 27-12, with Troy Nathan kicking one conversion but missing the next

Van Schalkwyk added a late third Zebre try, too late for the Italian side to give serious thought to a more consequential fightback.

Connacht's win moves them eights points ahead of the bottom club and the Irish province are now only one point behind ninth-placed Cardiff Blues.