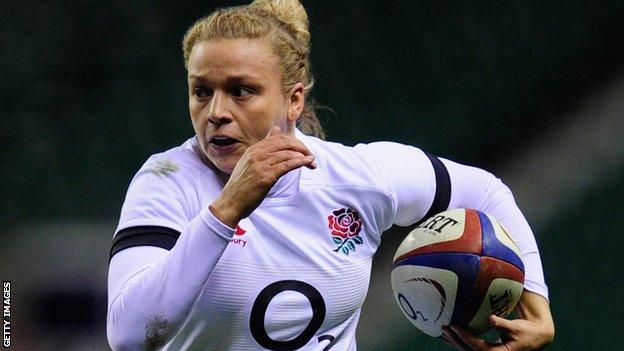 England condemned reigning champions Ireland to their first loss since March 2012 with a 17-10 win at Twickenham.

Tries from Sarah Hunter, Kay Wilson and Marlie Packer saw Gary Street's side move joint top of the Six Nations table, along with Ireland and France.

After falling 7-0 behind, the visitors hit back, Niamh Briggs converting a try from Larissa Muldoon to move 10-7 up.

But Wilson and Packer made sure of the victory as England matched the men's earlier victory over the Irish.

"Ireland are an excellent team and I thought they defended brilliantly," England coach Gary Street told BBC Sport. "Some of our rugby was outstanding at times and it was a great game of women's rugby, in front of a great crowd with 15,000 here.

"We are still building towards the World Cup later this year and that was a really important win."

England, Ireland and France all have four points from their opening three matches, although Ireland lead the way with a points difference of +60, with England on +58 and France +41.

After losing their opening match 18-6 to France, England bounced back to thrash Scotland 63-0 in Aberdeen in their last match on 9 February.