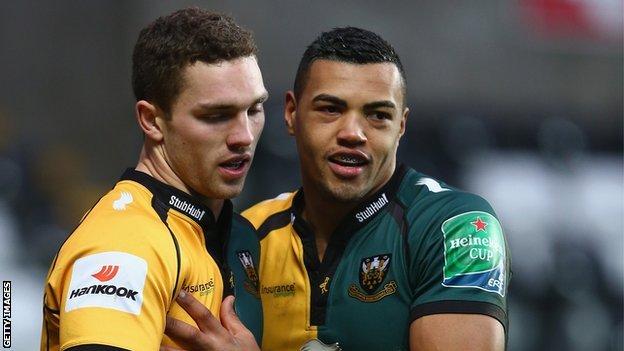 Burrell helped England set up a Triple Crown tilt against Wales in their 13-10 win over Ireland on Saturday.

North, usually a wing, scored from centre as Wales lifted their title hopes in Friday's 27-6 win over France.

"I like playing... wing, but we will see what the gaffer says," said North.

Wales lie third in a table that Ireland still lead despite their Grand Slam hopes being thwarted at Twickenham.

No team can win a Slam this season with England having lost in France while Wales came unstuck against Ireland in round two.

North moved from wing to centre amid a centre injury crisis that saw his former Scarlets team-mates Jonathan Davies (pectoral) and Scott Williams (shoulder) ruled out.

Davies was again absent as Scarlets saw off Edinburgh 25-21 in the Pro12 on Saturday.

Since suffering his injury against Australia in November, Davies has played only one half for his region, on 1 February against London Irish in the LV= Cup.

But his tournament ended in defeat by Ireland.

That prompted Wales coach Warren Gatland to move North from wing to centre against France.

North acknowledges there is a possibility of remaining in midfield, where he often played at age-grade level.

North, 21, and with 38 Wales caps plus three for the British and Irish Lions, said: "I have already texted him [Burrell] that I'm coming for him. No, I haven`t really!

"We've had some good banter already, and it is good to see him playing well.

"He has got his chance now in the England jersey, which is well deserved.

"I will need to step up and try to prove myself again for the England game, if need be.

"I like playing on the wing, but we will see what the gaffer says."

North says he made mistakes against France, but was pleased overall with his performance against a French midfield of Mathieu Bastareaud and Wesley Fofana.

"Centre is different. As a wing, I am just reading what the 13 is doing, but when you are 13 then you are making things happen and the wing has to read off you.

"It's quite difficult to try to get used to that.

"Obviously, I made a few mistakes, but as a first run-out I was pretty happy with that."