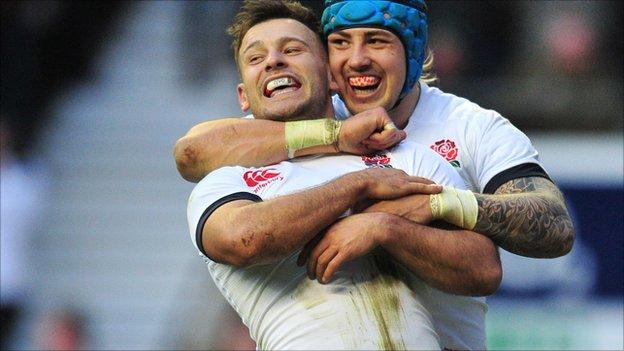 It will be the fourth round of the Six Nations tournament, with defeat for either side likely to end their hopes of winning the 2014 championship.

"This is the most significant win for this current England team. It is a special team, a special coaching team and that was a defining moment. I think England will really go on now and become something special. There are still some players to come back, the competition is fantastic and I think this sets England up for a long time."

Care scored a vital try in England's 13-10 victory over Ireland, leaving England, Wales, Ireland and France all with two wins and one defeat from their first three games - with Ireland topping the table on points difference.

"We've given ourselves a chance [of winning the Six Nations]," added Care. "We know we have to keep improving, keep getting better and take each game as it comes.

"Obviously Wales is going to be a huge game. They played really well on Friday so they are going to come here full of confidence. Hopefully it will be another great game."

England full-back Mike Brown says they are expecting a physical test against Wales, who defeated France 27-6 at the Millennium Stadium.

"Wales showed what they are about on Friday," said Brown. "They are going to be physical, they have got Lions players throughout their squad so we're really going to have to turn up again."

Meanwhile, Wales blind-side flanker Dan Lydiate is aware of the challenge they next face but says the prospect of keeping their championship hopes alive against their most bitter rivals is "massive motivation".

"We have to build on [the win against France] going into a big match at Twickenham," said Lydiate.

"The championship is a massive motivation. We take each game as it comes, but England are playing well at the minute and to go up to Twickenham and get a result would be massive for us.

"Every player has his own reasons for playing the game. There is that history and your families and everything. You want to do yourself proud every time you play."

"It is going to be a titanic battle and a great match but I just feel with Wales' experience they believe they have an edge over England at the moment. I just have a feeling Wales will beat England. It is the one game as a Welshman you want to play and will be an incredible game."

Welsh legend Phil Bennett believes despite England's renaissance the defending champions will just be too good and believes they will go to Twickenham and win.

"It is going to be a titanic battle and a great match but I just feel with Wales' experience they believe they have an edge over England at the moment.

"I just have a feeling Wales will beat England. It is the one game as a Welshman you want to play and will be an incredible game."

England coach Stuart Lancaster believes their victory over Ireland will give his young side huge confidence going into their game against Wales and has urged them to continue the momentum they have built up after successive victories.

"We now have a fantastic challenge coming our way from Wales," Lancaster told Sportsweek.

"They would have gained a lot of confidence and belief from that Wales game. We are respectful about the quality of their team.

"It is a different challenge, they have great players and they will be full of momentum when they come to Twickenham in two weeks' time.

"We are trying to build a team for the long term and victories like this to help the team cement that confidence.

"It will count for nothing if we don't back it up with another good performance and that is why we know need to focus our energy to the game against Wales."