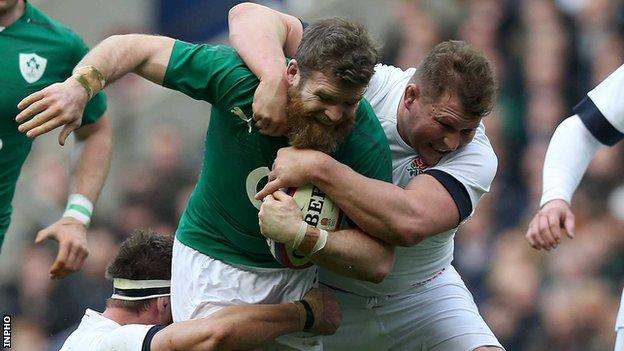 Ireland's Grand Slam hopes were ended as England edged a 13-10 victory but D'Arcy says the game showed that the Irish are continuing to make progress.

"We're a better team than we were eight months ago," said the Ireland centre.

"And as to the chances of a loss like this derailing the rest of the championship for us, there's no chance of that happening."

Stuart Lancaster's side can lift the Triple Crown if they see off Wales in round four, while the title is a now a four-way fight between England, Wales, Ireland and France.

Ireland coach Joe Schmidt refused to be downhearted after Saturday's Twickenham defeat and D'Arcy says the New Zealander will be able to refocus the Irish squad for the remaining games against Italy and France.

"With Joe driving that, and Paul [O'Connell], Brian [O'Driscoll], Johnny [Sexton], Jamie [Heaslip] and those guys, they are going to be getting everybody back together.

"We can't change the result but we look at the positives, fix the mistakes and we move forward.

"The whole tournament can be a bit of a game within a game, there's the Triple Crown but also the championship.

"We've lost one but we're still in the hunt for the other."

Rob Kearney's smart score to open the second-half raised hopes of a memorable Ireland victory but England hit straight back with a Danny Care try after a fine break from in-form full-back Mike Brown.

Ireland built several late field-position platforms to attack, but were unable to force a game-changing score at the death.

"We gave them three kickable penalties and that was probably the difference," said the 35-year-old.

"We played pretty positive rugby. We definitely played the more attacking rugby and when you don't get the results from that it can be pretty frustrating."

Saturday's defeat means the Leinster stalwart will retire in the summer without adding another Grand Slam to his trophy haul.

D'Arcy said O'Driscoll is not the only experienced Ireland star running out of chances to claim another European clean sweep.

Like D'Arcy, Ireland captain Paul O'Connell and prop Mike Ross are also aged 34 and presumably in the winter of their international careers.

"There's definitely an age profile on the squad and maybe a few guys won't get that many more chances at a win in Twickenham," added D'Arcy.