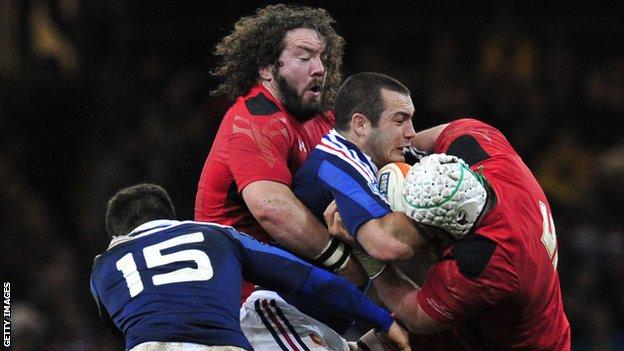 But as Wales prepare to face England at Twickenham on Sunday, he highlighted their resilience.

"We're pretty mentally strong. As much as we were pretty shocking against Ireland, we know what we are capable of when we play," said the 32-year-old.

"We weren't quite as bad as everyone made us out to be after one game.

"We didn't come back from those defeats - we didn't have the character.

"But I was thinking before the France game that this is the first time this has happened to our team in the last four or five years.

"We've never got stuffed by a home nations team and wondered where we are now, but the boys showed a lot of character, put in a lot of hard work and it came off."

The Osprey points to the withdrawal just before kick-off against France of Lions lock Alyn Wyn Jones with a foot infection.

Scarlets' Jake Ball was promoted to the starting line-up for just his second cap and impressed in a strong Welsh pack performance at the Millennium Stadium.

"It was a massive loss with Alun Wyn, but Jake came in and did a hell of a job," Jones said.

"He was the perfect second row to play against France, big and uncompromising, and he certainly didn't look out of place."

After the previous round's loss in Dublin, Wales coach Warren Gatland had warned his players that some might be playing their last Test if they underperformed again.

Jones says the squad took that criticism on board, especially some of the forwards who had received the harshest comments.

"In this squad now there's competition in every place and you can't rest on your laurels anymore," Jones added.

"As a pack of forwards we were told that in no uncertain terms.

"I'll probably be my harshest critic and I've worked hard with Robin [Wales forwards coach McBryde], tweaked a few things technically, and we're getting there slowly.

"We're working hard at it and there's a little bit of life in me and Geth [Wales loose-head prop Gethin Jenkins] yet."

Defending champions Wales face England at Twickenham on Sunday, 9 March having put themselves back in the title race as they chase an unprecedented third consecutive Six Nations crown.