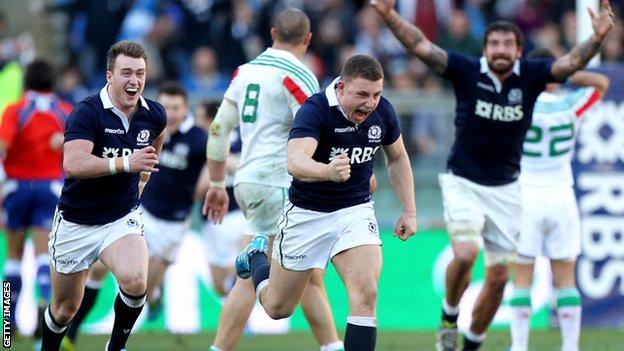 Scotland trailed Italy 20-18 with the clock showing that 79 minutes had elapsed. Scotland had one chance to snatch a desperately-needed win.

If Chris Cusiter's pass was slightly off, if Duncan Weir's drop-goal attempt did not come off his boot just right, then the Scots would have suffered a third consecutive Six Nations defeat and headed home to face another heavy dose of the criticism they have received in recent weeks.

Instead, Cusiter's pass hit its mark and Weir's drop goal was, as he said himself, "the stuff you dream about when you're a kid".

Scotland emerged with a win in what many felt was a do-or-die match.

Interim head coach Scott Johnson, though delighted with the win, was keen to stress that one victory does not solve all his side's problems.

"You can enjoy the moment, but it's only a moment," he said. "Let's not get carried away."

And yet the importance of this triumph cannot be denied.

Small margins decide big matches, but the margin between Scotland's desired level of performance and what they demonstrated in the defeats by Ireland and England was a chasm.

The storm of recriminations that followed was fierce - whether it was justified is a matter of opinion - and the Scottish fans desperately craved some sort of reaction from their team in Rome. They got it.

In the build-up, Johnson had urged his players to use the flak that had been flying their way as a motivational tool. "They're coming at us. Walk towards the pressure," the coach told his players.

Several key men made excellent contributions to the winning cause.

Richie Gray gave a timely reminder of the qualities that made him a British and Irish Lion. Powerful in the loose, imperious at the line-out, he's unlikely to find himself left out of the squad again anytime soon.

The centre partnership of Matt Scott and Alex Dunbar has always looked exciting on paper and, on Saturday, they began to fulfil that promise.

Other than the odd bit of magic from Stuart Hogg, it's been a while since we've seen a Scottish back slicing through defences, so Dunbar's well-taken second-half tries were a sight for sore eyes.

Weir's winning drop-goal will live long in the memory and hopefully give him the confidence to push on and nail down the number 10 jersey.

For too long - certainly since the retirement of Dan Parks - the battle for the fly-half berth has been one with no clear winner. The chopping and changing in such a key decision-making role has been at a detriment to the entire back division.

Weir - who started his career at Cambuslang - has been vying with Ruaridh Jackson at club level with Glasgow Warriors and also at international level, but he now seems to have convinced Johnson he is the man for the future. He still has some developing to do in the role, but his heroics in Rome should do him the world of good.

There are, then, several positives to take but it was far from a flawless performance. And, as Johnson said after the match, what he craves most is consistency.

Scotland's habit of conceding at key moments reared its ugly head once again against the Italians.

They conceded a try right on the stroke of half-time - just as they had done in Dublin against Ireland - when one more minute of solid defending would have seen them go in at the break 6-3 down and well in the hunt.

Then, with 10 minutes to go, they engineered a winning position through Dunbar's second effort, only to allow Italy to hit back almost immediately with a try of their own.

The positives far outweigh the negatives, though.

Italy were not at their best; that is undeniable. This, though, was the side that many made favourites against Scotland on the basis that they gave Six Nations champions Wales problems at the Millennium Stadium on match-day one then dominated France for long spells in Paris before succumbing to the genius of Wesley Fofana.

So this is not a poor Italian outfit and Scotland's win is to be applauded.

After the hapless second-half against the Irish and the surrender on home soil against England, a last-gasp win in Rome may just be the platform to salvage something from this season's Six Nations.

Next up is France at Murrayfield. The hosts will go in as underdogs, but it's a role the Scots relish.