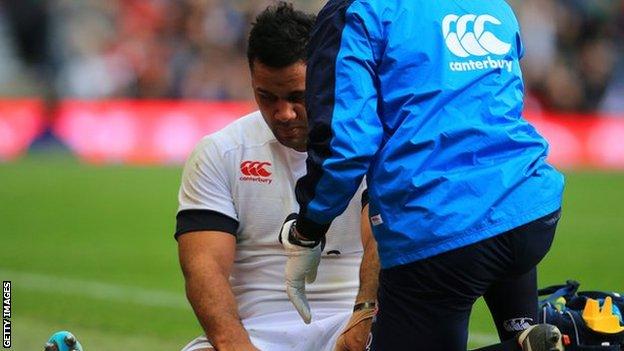 England number eight Billy Vunipola will miss the rest of the Six Nations after picking up an ankle injury in the 13-10 win against Ireland on Saturday.

The 21-year-old limped off in the first half at Twickenham after being tackled by Ireland lock Devin Toner.

A scan on Monday revealed the Saracens player had suffered ligament damage.

"It is a blow as Billy has had a good Six Nations but he is young and will be back," said England head coach Stuart Lancaster.

"The encouraging thing is we have got Ben Morgan and other back rows such as Matt Kvesic and Tom Johnson."

Flanker Tom Wood has recovered from the cramp he suffered in Saturday's win and will return to the squad's Surrey training base on Tuesday morning.

Vunipola limped off shortly before half-time against Ireland but returned to watch the second half from the bench with his ankle heavily strapped.

His injury means he will miss the crunch game against Wales at Twickenham on 9 March.

England will claim the Triple Crown for the first time since 2003 if they win that game, before ending the campaign with a match against Italy in Rome on 15 March.