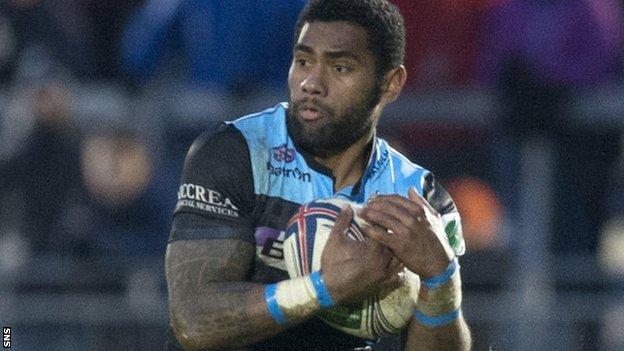 The scrum-half's blocked effort led to a late Ross Wardle try that allowed the Welsh side to come from behind and win the Pro12 game 24-23 in Wales.

"Although he got the kick charged down for their third try, we could have organised our positioning much better."

Indeed, Matawalu scored Glasgow's second try with a fine solo run from his own 22.

"He was at the heart of all our positive play," said Townsend, who pointed out that the scrum-half was left "on his own with four Dragon players on top of him" for Dragons' decisive score.

"The first thing in rugby you have to do to win matches is have outstanding defence and the second thing is to make sure you don't beat yourself and put yourself under pressure to give the opposition easy opportunities and we did that twice."

The defeat leaves Glasgow trailing in fifth place in the table and next face a tough trip to Dublin against Leinster.

"To lose the game in the last 10 minutes is so frustrating, but we need to pick ourselves up," added Townsend.

"It's a quick turnaround as we have the champions away from home on Saturday and we've got to play much better.

"Some of the rugby we played when we had the ball was good, but I would have liked to have seen more from them when we didn't have the ball.

"We pride ourselves on having a really strong defence, but at times it wasn't good enough.

"The Dragons are very good in the contact area and, although we defended better at the beginning of the second-half, it was loose play at the end which cost us the win."