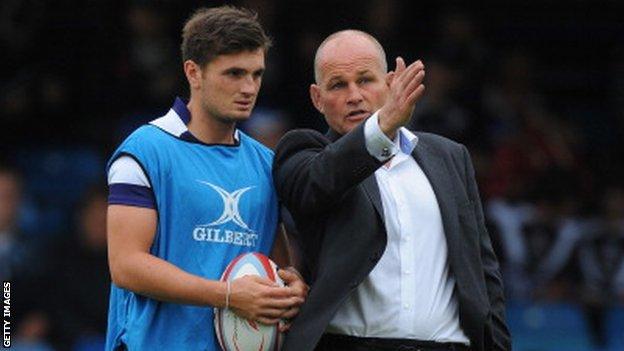 Boss Andy Robinson has praised his Premiership-chasing Bristol side for progressing faster than he expected.

Bristol's 43-12 win over Plymouth Albion on Sunday took them to the top of rugby's Championship table.

"We've scored a bonus point at every home game this season in the Championship and it was great to do it again.

"We're ahead of where I thought we'd be at the start of the season," Robinson told BBC Radio Bristol.

"Our goal is to be in the play-offs and in control of our destiny once we're there. This was another step in achieving that."

George Watkins, Andy Short and Marco Mama scored two tries each in the win at the Memorial Stadium, with Jack Wallace also touching down.

The victory took Bristol, who have been recruiting heavily as they pursue a long-awaited return to the top-flight after relegation in 2009, four points clear of second-placed Leeds Carnegie.

"We've scored a try bonus point at every home game this season in the Championship and it was great to do it again," said director of rugby, and former England and Scotland boss, Robinson, following the win against Plymouth.

"The boys had a lighter week and that showed in their performance. We are starting to build our performances. March is going to be an important month for us and that's our focus now."